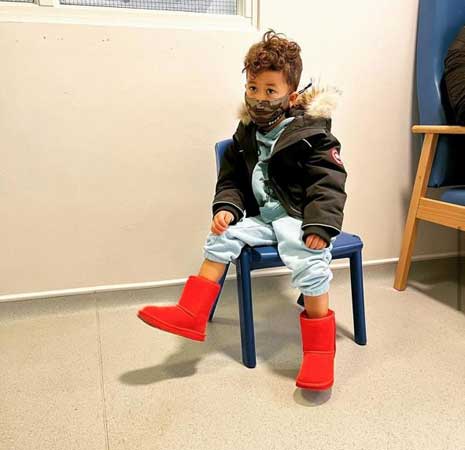 Chrissy Teigen and John Legend’s toddler son Miles is on the mend after a health scare. On Thursday, Dec. 23, the supermodel posted on her Instagram a photo of the 3-year-old sitting on a chair in a waiting room inside what appears to be a National Health Services hospital or clinic in the United Kingdom.

“Bear got a little bite that got infected,” Chrissy wrote. “We thought it was a deep splinter but ultrasound showed nothing! Anyhoo he is all good!”

She added, “He got a little bite on his booty that was looking infected! My bear. He’s all good now!”

On Tuesday, Dec. 21, Chrissy shared on Instagram several photos of the couple, Miles and daughter Luna, 5, on a pre-holiday trip to the United Kingdom, which included a pic of herself walking by a post office in an English village. She captioned the photos, “Missing teeth, marshmallows, pg tips [tea], lentil soup, late night noodles and very cold strolls!”

On her latest post about Miles, Chrissy wrote, “And the visit was free. It always feels like a trick. But it is not. It is simply universal healthcare. It is beautiful when a country sees value in its people being healthy and financially safe from insurmountable healthcare debt. We should try it someday.”

In the United Kingdom, the state-funded National Health Service provides most healthcare for free to residents and emergency outpatient treatment for overseas visitors at no charge.

In response to a critic who said, “It isn’t FREE, it’s paid for by taxes,” Chrissy remarked, “I know that. I’m saying we pay high taxes and insurance up the ass and still have to pay for healthcare. And yeah, we have money and didn’t have to pay. It’s not like there was a tip jar. Or a jar that said ‘celebrities pay here.'”