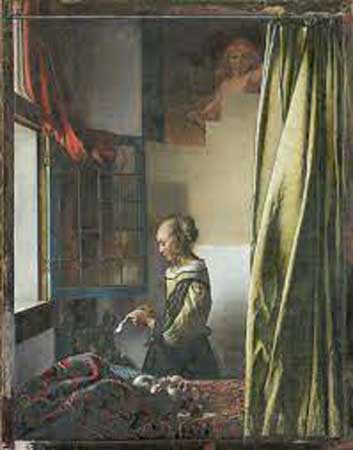 Experts of the Dresden State Art Collections were astonished when they closely examined Vermeer’s “Girl Reading a Letter at an Open Window” using technical equipment: Under a layer of paint hid a youthful Cupid. The artist had painted the figure on the wall behind the girl, who seems to be reading innocently. After two years of work to reveal the original, the painting was presented to a surprised audience. Alongside Rembrandt and Rubens, Dutch painter Jan Vermeer is considered one of the most famous artists of the Baroque period. His “Girl Reading a Letter” was and is considered one of the best works of the Dutch Golden Age between 1600 and 1700, during which the Netherlands prospered politically, commercially and culturally. With only 37 paintings, Vermeer’s oeuvre is rather small, contributing to the excitement that the finding in Dresden triggered in the world. The museum is now celebrating the painter with the exhibition “Johannes Vermeer. On Reflection.” “Uncovering parts of paintings that have been drawn over is not always as meaningful as in the case of Vermeer,” says Maria Galen, expert for modern art and gallery owner in the western German city of Greven.