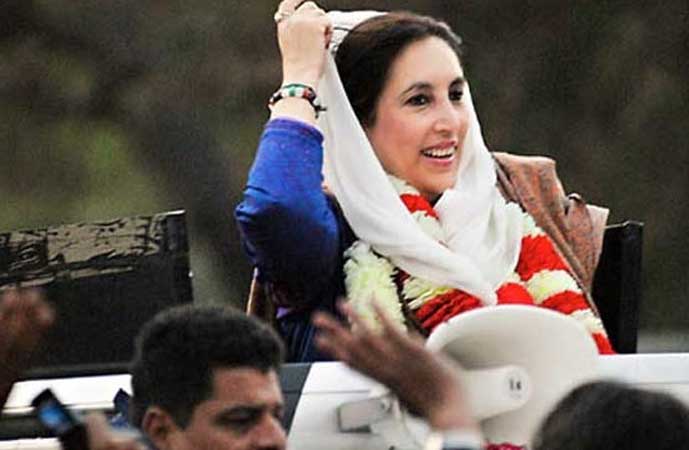 The anniversary would be held on Monday at Garhi Khuda Bakhsh, the ancestral graveyard of Bhutto family.

Sindh Chief Minister Murad Ali Shah told reporters on Sunday that tight security arrangements have been made to meet any eventuality.

There will be a public meeting to be addressed by the Chairman of PPP Bilawal Bhutto, Aseefa Bhutto, Nisar Ahmed Khuhro and central leaders of PPP at Garhi Khuda Bakhsh.

Former president Asif Ali Zardari will not attend the event due to bad health, according to party sources.

A documentary, depicting life and achievements of Shaheed Benazir Bhutto will also be shown on the occasion.

Separate camps have been set up to accommodate the leaders and workers from all the four provinces, Gilgit-Baltistan, Northern areas and Azad Kashmir.

The coronavirus standard operating procedures (SOPs) will be followed on the occasion.

Over 7500 police personnel, including women cops, traffic wardens, special police commandos of Sindh Police and 300 personnel of Shahbaz Rangers will also be deployed to ensure law and order on the occasion.

The party will also hold special prayers across the country for their slain leader. PPP Chairman Bilawal Bhutto Zardari Sunday arrived in Larkana to attend the death anniversary commemoration of his mother. Thousands of PPP activists were heading to Larkana on Sunday. Many were already at the Bhutto family mausoleum in Garhi Khuda Bux and were posting their pictures to the social media.

The book was launched on the eve of 14h death anniversary of Benazir Bhutto at the Institute of Research and Reforms (IRR), which Rehman heads as the chairman.

Addressing the book launch in Islamabad, Rehman said it was a misconception that the PPP government failed to investigate the assassination during its five-year term. All the perpetrators were identified, arrested and prosecuted, he said, adding that the court sentenced them to jail terms.

The former interior minister said Asif Ali Zardari has become politically active again and the government felt alarmed over it.

He said whenever Zardari joins the game, his opponents face certain defeat and the way the government was panicking indicated that there was something fishy.

To a question, the PPP leader said that if Nawaz Sharif wants to return to the country no one was going to stop him. BB Shaheed 14th death anniversary to be observed on Monday Arrangements have been completed and Quran Khawani will be held for the departed soul at Liaquat Bagh – her martyrdom place – Pakistan People’s Party PPP District President for Women Wing Sumera Gul said.