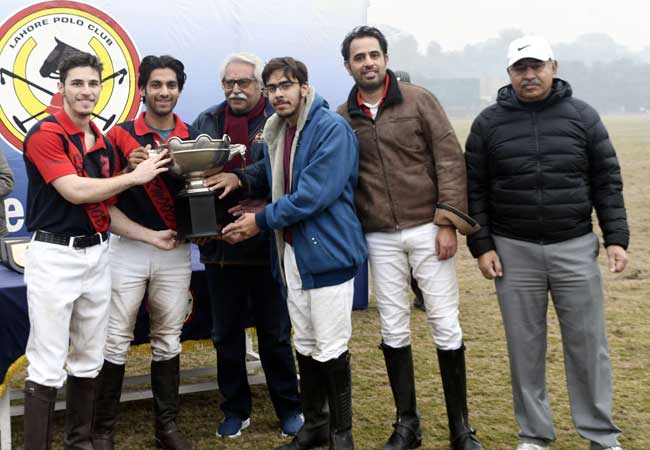 LAHORE: Sensational Omar Asjad Malhi and Nazar Dean Ali Khan steered Sherwood Farm to a nail-biting 6-5 title victory over Remington Pharma in the Christmas Polo Cup 2021 main final at the historic Lahore Polo Club Ground here on Sunday. The main final of the event proved to be a thrilling encounter where both the teams matched fire-with-fire and fought very hard till the end and the score was equal at 5-5 when the final whistle was blown. The match was then decided in the sudden death chukker where once against a see-saw battle was witnessed but one of the heroes of Sherwood Farm, Omar Asjad Malhi, then malleted the match-winning goal to guide his side to a well-deserving title triumph. Both the heroes from the winning team ––– Omar Asjad Malhi and Nazar Dean Ali Khan –––– displayed high-quality polo skills and techniques and thrashed in two tremendous goals each. The other key contributor from the winning side was Ibrahim Naveed Sheikh, who added one goal in the total tally. Team Remington Pharma also played superb polo and gave tough time to Sherwood Farm before losing the title clash by a narrow margin of 5-6. Agha Musa Ali Khan was top scorer from the losing team as he hammered a hat-trick of goals while his brothers Agha Hashim and Agha Adam converted one goal apiece.

Veteran polo player Major (r) Javed Mawaz graced the concluding ceremony as chief guest while other notables present on the occasion were Lahore Polo Club President Umer Sadik, Executive Committee members, players and their families and polo enthusiasts. They fully enjoyed the thrilling encounter as well as the chilled weather. Earlier in the subsidiary final, Guard Group recorded a narrow 4-3½ triumph over Polo Lounge. Taimur Ali Malik was hero from the winning team as he contributed with two tremendous goals while Arib Ali Malik and Ahmed Zubair Butt scored one goal each. From the losing team, which had a half goal handicap advantage, Ahmad Bilal banged in a brace while Adil Tiwana struck one goal.