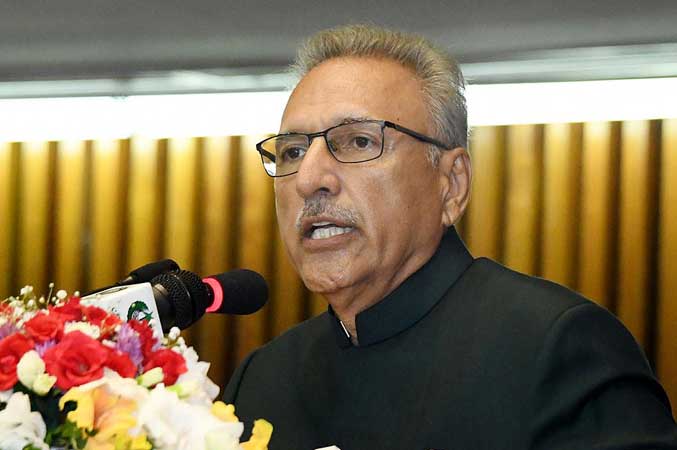 He was speaking at an event “Quaid aur Bachay” organized at the President House in connection with the birthday of Quaid-e-Azam Muhammad Ali Jinnah. Samina Alvi, wife of President Dr Alvi, ministers, members of Parliament and people from different walks of life attended the event.

The president congratulated children for their impressive performance at the event that had become an annual feature at the President House.

The president praised the performances of children who paid tribute to founder of Pakistan, Quaid-e -Azam and in their speeches highlighted different aspects and achievements of his life.

The president said freedom was a blessing and many nations struggled for hundreds of years to get freedom which was the most precious quality.

He expressed his optimism that country’s vibrant youth would take the leadership roles in future and play a pivotal role in the affairs of the country. He advised the children not to waste their time and focus on their studies.

While sharing his experiences of youth’s days, the president said sports were good for body and mind but youth should follow advice of their parents and keep balance in the studies and sports.

The president noted that mother of Quaid-e-Azam, who was also fond of sports, advised him to pursue his studies. He further informed that children used to write letters to Quaid-e-Azam Muhammad Ali Jinnah who also replied to those letters.

Quaid-e-Azam kept his sister Fatima Jinnah alongside him, he said adding family values were important to keep the society move ahead.

Goals could be achieved with unity, he said and urged the students to always speak truth and stay away from evil. He called upon the children to respect their parents and teachers and take care of elders as pronounced by the Islamic teachings in the Holy Quran. Youth should also exhibit good behaviour towards children from other religions and differently-abled children, he stressed.

The president prayed for freedom of Pakistan till eternity.

At the end of the event, the president along with children cut cake to celebrate birth anniversary of Quaid-e-Azam.

He also posed for a group photo with the school children who performed at the event.

Amid clapping, groups of children presented popular songs paying tributes to the founder of Pakistan.

The president, in his message to the nation, said on the day the whole nation paid tribute to the father of the nation who made the utmost struggle for the independence of the Muslims of the subcontinent, a separate and independent state for them.

He said due to his tireless efforts, capabilities, determination, and extraordinary character, the great Quaid materialized his dream of the creation of Pakistan.

The president said that in order to cope with the prevailing challenges, the nation should follow Quaid’s golden principles of faith unity and discipline.

Moreover, he also called for working through discipline, brotherhood, and dedication for the country’s prosperity which also required the contribution of all segments, ethnicities including minorities. The president also urged the nation to make a pledge for making Pakistan a great and a strong country.