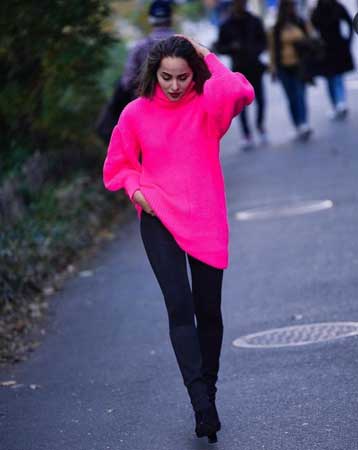 The latest video and pictures of actor Nimra Khan are going viral across the social media application Instagram.

The video sees Nimra Bucha walking towards the camera in a pink and black outfit top before giving a flying kiss to the viewers with the song I Feel Pretty playing in the background.

On the other, the ‘Rishta Anjana Sa’ star is seen posing for the four-picture gallery on a street.

The video and the pictures of the star got thousands of likes from the users of the picture and video-sharing social media application.

Nimra Khan is one of the most followed celebrities of Pakistan on social media with 2.4 million followers on Instagram. She shares clicks and clips for her fans.

Earlier, the actor took social media by storm by sharing pictures of her in a full black outfit and got thousands of likes from Instagram users.

The versatile actor has worked in several super hit dramas and films. She can play a variety of roles whether it be of a protagonist or an antagonist both.

Her performances in the projects namely Rishta Anjana Sa and Bhool were met with positive reviews from fans and critics alike.