Shehzad, Zameer strike as Pakistan down India in Under-19 Asia Cup 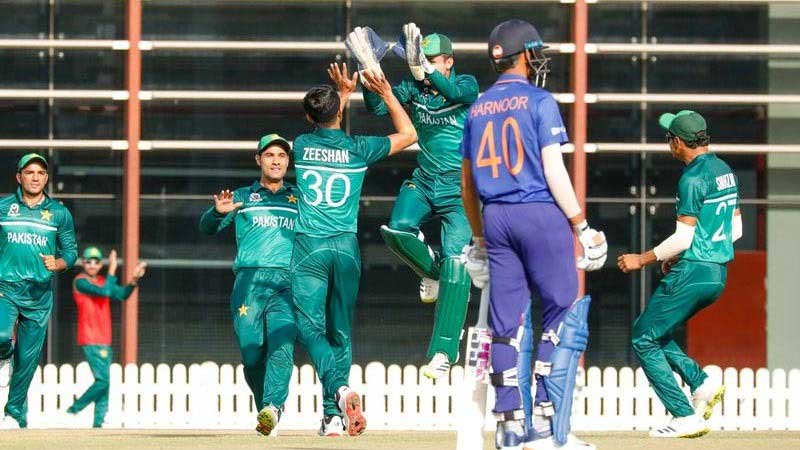 LAHORE: Pakistan defeated India by two wickets in a last-ball thriller in their ACC Under-19 Asia Cup on Saturday in Dubai, United Arab Emirates, going up on top of Group A with two wins from as many matches. India, now second in the group with one win and a loss, were rocked by right-arm medium pacer Zeeshan Zameer’s fifer (5/60) after being sent into bat. A mature half-century by wicketkeeper-batsman Aaradhya Yadav (50) and Harnoor Singh (46) helped them reach a competitive total of 237 all out. Pakistan rode on a stroke-filled 81 by No.3 Mohammed Shehzad and a late cameo by Ahmad Khan (29 not out) to chase down the total – which came amid some drama when Ahmad hit Ravi Kumar struck a boundary off the last ball to seal the game. Shehzad, who also took two catches, was adjudged Man of the Match.

India were off to a stuttering start when they were reduced to 14 for three, losing opener Angkrish Raghuvanshi (0), Shaik Rasheed (6) and skipper Yash Dhull (0) with Zameer accounting for all the wickets. Nishant Sindhu (8) became Awais Ali’s first victim as India slipped to 41 for four. Harnoor showed resilience with a patient 59-ball 46. Just when he looked good for a half-century, Ali struck to leave India at 96 for five. Yadav’s 83-ball 50, which included three fours, coupled with Kaushal Tambe’s 32 and Rajvardhan Hangargekar’s brisk 33 off 20 balls, took India past the 230-run mark.

Chasing 238, Pakistan lost opener Abdul Wahid (0) early as Hangargekar castled him. Then, Maaz Sadaqat (29) and Shehzad (81) rallied the innings with a 64-run stand for the second wicket. Shehzad, who hammered four boundaries and five towering sixes, was in belligerent mood as Sadaqat played second fiddle. Left-arm medium pacer Raj Bawa (4/56) broke the stand by removing Sadaqat. Bawa struck again by dismissing Haseebullah (3) as Pakistan slipped to 69/3. Skipper Qasim Akram (22) also fell cheaply as Pakistan were at 115/4, even as Shehzad continued to tore apart the opposition attack. Hangargekar ran out Shehzad in the 37th over to bring India back into the contention as Pakistan lost half its side for 159.