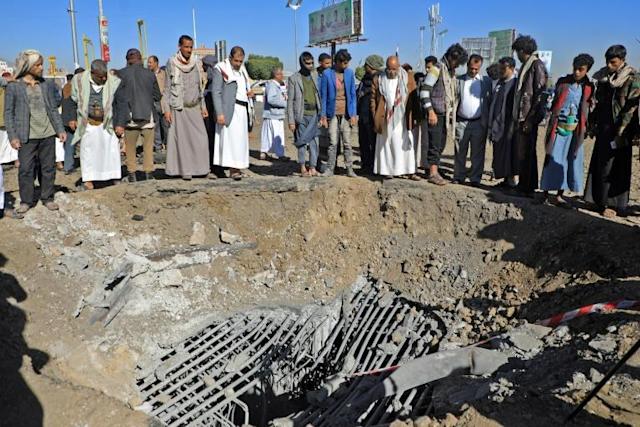 The Saudi-led coalition on Saturday launched a “large-scale” assault on Yemen after a projectile killed two people in the kingdom, in the first such deaths in three years blamed on Iran-backed Houthi rebels. A retaliatory coalition airstrike on Yemen killed three people and wounded six others in Ajama, a town northwest of the Houthi-held capital Sanaa, Yemeni medics said.

Yemen has been wracked by civil war since 2014 pitting the internationally recognised government supported by the Saudi-led military coalition against the Houthis who control much of the north. Tens of thousands of people have since been killed, in what the UN has described as the world’s worst humanitarian crisis.

Saudi’s civil defence said that two people, one Saudi and the other Yemeni, were killed and seven others wounded in the projectile attack on Jazan, a southern region of the kingdom bordering Yemen.

“A military projectile fell on a commercial store on the main street, resulting in two deaths,” it said in a statement, adding six Saudis and a Bangladeshi national were wounded.

The Saudi-led military coalition said shortly afterwards that it was “preparing for a large-scale military operation”.

It responded later with an airstrike in which “three civilians including a child and a woman were killed, and six others were wounded”, the Yemeni medics told AFP. The coalition said it would hold a news conference later on Saturday to address the latest developments.

Yemen’s Houthis regularly launch missiles and drones into neighbouring Saudi Arabia, targeting its airports and oil infrastructure. But the latest was the first in more than three years that has resulted in fatalities in the kingdom, which recorded its first death from a Houthi missile attack when a missile struck Riyadh in 2018.

It also comes as fighting between the two sides intensifies, with the coalition ramping air strikes on Sanaa. Saudi Arabia and its ally the United States have long accused Iran of supplying the Houthis with sophisticated weapons, a charge the Islamic republic denies. The US Navy said this week that it seized 1,400 AK-47 rifles and ammunition from a fishing boat it claimed was smuggling weapons from Iran to the Houthis, who are from Yemen’s Zaidi Shia minority.

“The stateless vessel was assessed to have originated in Iran and transited international waters along a route historically used to traffic weapons unlawfully to the Houthis in Yemen,” it said.

On Thursday — a day after the coalition targeted a Houthi military camp in Sanaa — the military alliance said it shot down a bomb-laden drone near Abha airport in the south of the kingdom, causing debris to fall nearby but leaving no casualties.

And earlier this week, it targeted Sanaa airport, whose operations have largely ceased because of a Saudi-led blockade since August 2016, with exemptions for aid flights.

The World Food Programme said it has been “forced” to cut aid to Yemen due to lack of funds and warned of a surge in hunger in the country.

“From January, eight million will receive a reduced food ration, while 5m at immediate risk of slipping into famine conditions will remain on a full ration,” the UN agency said in a statement, adding that it was “running out of funds”.

The UN estimates Yemen’s war will have claimed 377,000 lives by the end of the year through both direct and indirect impacts.

More than 80 per cent of Yemen’s population of about 30m requires humanitarian assistance in what the UN says is the world’s worst humanitarian crisis.