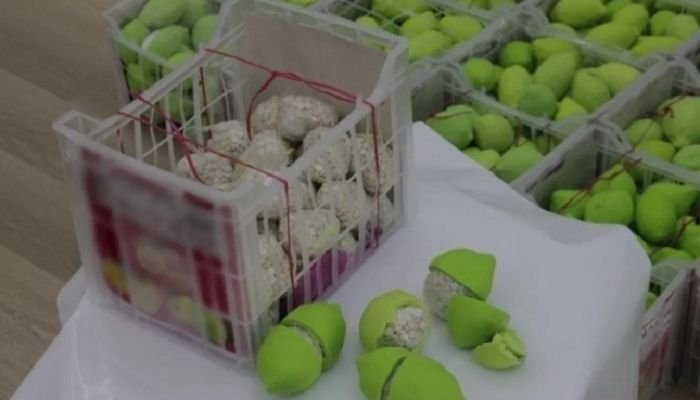 The Dubai Police said Thursday they have arrested four men “of Arab nationality” for trying to smuggle millions of dollars worth of captagon pills hidden in plastic lemons into the UAE.

Captagon is an amphetamine-type stimulant manufactured mostly in Lebanon, although probably also in Iraq and Syria, and much of which is bound for Saudi Arabia.

The drugs, which the official WAM news agency said had a street value of $15.8 million, were seized after a tipoff, police Major General Khalil Ibrahim Al Mansouri said.

In an operation dubbed “66”, the #DubaiPolice uncovers AED 58 million worth of captagon pills hidden in lemon shipment. pic.twitter.com/UamNYy48TX

Mansouri said the illegal pills were “hidden in fake lemons in a shipment of lemons inside an incoming refrigerated container”.

Four suspects living in the UAE — “all nationals of the same Arab country” — were arrested.

Police said that inside the refrigerated container were “3,840 boxes of lemons, 66 of which had fake lemons containing the captagon pills”.

They released a video of the find, showing boxes with markings indicating their origin was Lebanon.

Lebanon is often criticized by Gulf countries for not cooperating in the war against drugs, particularly captagon.

In April, Saudi Arabia announced it was suspending imports of fruit and vegetables from Lebanon after more than five million captagon pills hidden in fruit were seized.

And in June, more than 14 million amphetamine pills concealed between sheets of tin and originating in Lebanon were seized in the kingdom.

In October, Saudi Arabia denounced Lebanon´s failure to “stop the export of the scourge of drugs” to the country.