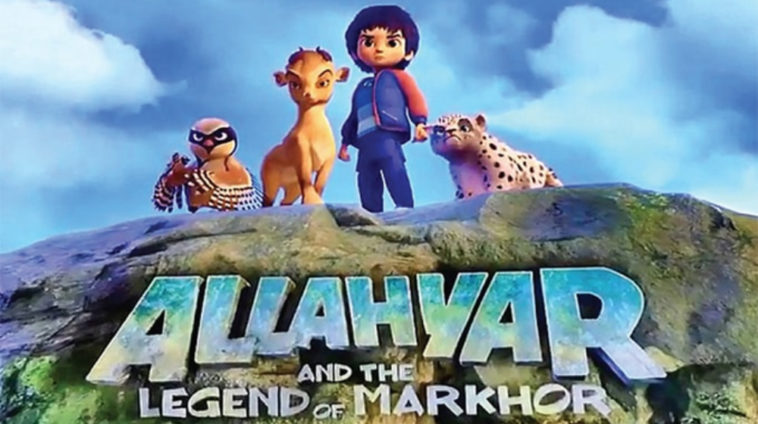 BEIJING: ‘Allahyar and the Legend of Markhor’, the first China-Pakistan animated movie which shares the important message of wildlife and natural resources preservation especially with the young, will be set for theatrical release across China on December 25.

The animated film, originally released in Pakistan in 2018, was remade for the Chinese market through joint efforts of Chinese and Pakistani producers, making it the first animated film co-produced by the two countries.

Pakistan Ambassador to China, Moin ul Haque termed the movie a groundbreaking milestone as the first joint animation production of the two countries.

The movie, the first China-Pakistan animated co-production, is significant in light of China-Pakistan’s 70th anniversary of diplomatic ties, he said during the premier show of the movie held last week.

Markhor, or screw-horned goat, is the national animal of Pakistan just like the giant panda is for China, so the film not only promotes Pakistani culture but teaches children how to protect wild animals and nature.

He looked forward to both the countries doing more of such successful joint ventures in the future and more Pakistani films and dramas being available for the viewers in China.

“In the future, there will be more Pakistani movies launched on screens in China, introducing Pakistani culture to Chinese people and helping strengthen connections between the peoples of the two countries, including future generations,” he added.

In a video message, the Director and Producer of the movie, Uzair Zaheer Khan expressed pleasure over screening his film in China.

He thanked the Pakistani and Chinese governments for extending help and support and he especially thanked co-production partners in China who have worked tirelessly to make it a success.

Uzair Zaheer Khan informed that the Chinese co-producers carried out the required amendments and enhancements in China only to better suit the taste of the Chinese audience.

Amid the growing popularity of Pakistani movies in the Chinese market, there is great potential for more cooperation between China and Pakistan in the film industry.

“The two countries can hold more film conferences and seminars to gain a better understanding of each other…And the logical next step is to extend the cooperation to the industrial chain and the making of films,” Zhong Wenjun, CEO of Danxi Pictures, in an interview.

The company is one of the Chinese co-producers that mainly engage in the promotion, releasing, and film-related products of the Allahyar and the Legend of Markhor in the Chinese market.

The animated production follows the story of Allahyar, a young and curious boy who ends up dealing with difficult circumstances in the northern mountains of Pakistan. In a series of events, Allahyar tries to save a markhor from hunters and also makes friends with other animals such as a snow leopard after he is rewarded with the ability to speak to animals.

What sets the film apart from other animated movies produced so far is that it comprises fine quality animation anchoraged in an indigenized storyline and localized characters the likes of Mehru (Markhor) and Chakku (A Snow Leopard).

Liu Chun, manager of the China Film Co-Production Corporation, said at the premiere that it took four years to make the movie and the work is a rare example of a Chinese co-produced animated movie.