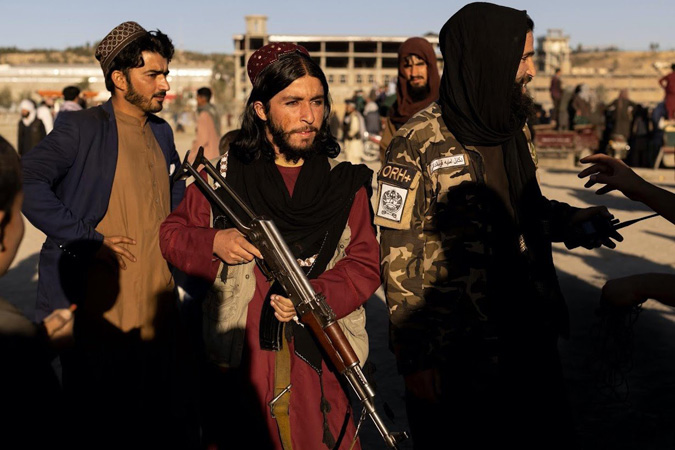 The generation of young Taliban fighters that conquered Kabul has gone through the euphoria of victory to face an uncertain future as the country they won after two decades of war plunges ever deeper into economic crisis.

Most have known only fighting and while their battlefield memories may be a source of pride, they must now adjust to a world that wants to forget about war.

For the moment, four months after the fall of Kabul, many still bask in the achievement of overcoming the United States and its allies after a struggle that ruled their lives for so long.

“When I started in the Jihad against the Americans, I was 14 or 15 years old,” said Nasratullah, a 24-year-old from Wardak province. “During that time, my brother was our group leader and I used to participate in some battles only. But when I turned 20, I spent all my time with the mujahidin and in battle.” Recently married, he is now in charge of security at a Kabul police station but had only a walkie talkie with him as he walked across a dusty cricket field. “I am so delighted because we have fulfilled all the ambitions that we have been carrying for the past 20 years.” For the people of Kabul, a city many Taliban fighters had never seen before their victory, the first reaction to the fall of the capital was very different.

Thousands were killed and maimed by Taliban suicide bombers during their long campaign to overthrow the Western-backed government and for many in Kabul the sight of the long-haired fighters on the streets caused only shock and fear. That feeling has eased as the Kalashnikov-wielding insurgents in their rag-tag mix of loose traditional clothing and combat jackets have been replaced by uniformed security forces. But fears of revenge against anyone associated with the former government remain, and there are concerns over what will happen to women and to girls who are still largely excluded from high school education. Nasratullah blamed American propaganda for tarnishing the image of the Taliban. “They used all their resources, they have brainwashed the people, they used every way to show us as bad people.” For their part, the Taliban fighters have memories of war which shape the way they look at the world now.

Mansoor, from Maidan Wardak province, who carries the title Mawlawi given to those respected for their religious knowledge, spent 14 or 15 years in the insurgency, eight of them in the notorious Bagram prison outside Kabul where many Taliban were held.

“When Americans told me you are a prisoner, I told them those who had come to be occupiers are the real detainees,” he said in the red-carpeted police station where he now oversees security for the 7th district of Kabul. “The prison was not for me, it was for them all these years. We were physically detained, but our ideas were freer than ever.” “When I was free, I joined the fight the next day.” But as Kabul recovers from the trauma of August to face a mounting economic crisis, the challenge facing the Taliban was summed up by 18-year-old madrasa student Sayed Adel. “We are happy that we have an Islamic government, but an Islamic government must provide jobs for Muslims,” he said. “Today all the Muslims are in poverty, no one can provide his family with food.” After fighting the Americans, the Taliban must now seek their cooperation, not least to release billions of dollars in funds which have been frozen outside Afghanistan.