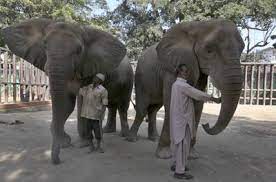 KARACHI: On Wednesday, the Sindh High Court (SHC) was informed that four African elephants at Karachi’s Safari Park and zoo urgently require medical attention due to food shortages and other health-related difficulties.

The revelations were disclosed in a report presented to the high court bench by a German doctor, Frank Cortez, who was a member of a four-person medical board.

He shared that after a medical examination of four African elephants at the Safari Park and zoo, it emerged that they suffer from food scarcity, and two of them had issues with their teeth.

“An immediate surgery is needed to pull out broken teeth or else it would endanger their lives,” the doctor said while also recommending a healthy diet for them to avoid obesity-related issues.

He further stressed routine medical checkups for the elephants in order to timely determine and address health issues faced by them.

The report further highlighted that the ultrasound of an elephant led to a disclosure that it was a female, against what is previously believed as a male.

He shared in the report that initial treatment has been given to the animals including cutting their nails, a minor surgery of teeth, however, they are still in pain.

In response to the study, the KMC’s legal counsel stated that the elephants are receiving the best possible care and requested a copy of the report in order to address the medical issues identified in it.

The hearing was extended until January 13 after the SHC bench was ordered to give a copy of the report.