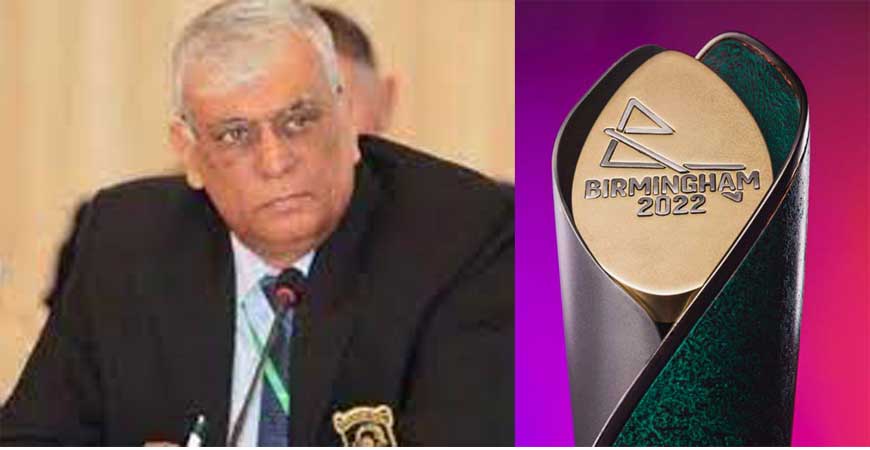 LAHORE: The countdown is on, as in just six days, the Birmingham 2022 Queen’s Baton Relay will arrive in Pakistan, the 23rd destination out of the 72 Commonwealth nations and territories it will be visiting. On Monday (December 27), Lt Gen (r) Syed Arif Hasan, Pakistan Olympic Association President, and Muhammad Khalid Mahmood, POA Secretary General, will officially welcome the Baton. A busy schedule of activities and events are planned for the Queen’s Baton Relay, with opportunities to showcase untold stories from baton-bearers, athletes, and young people who are striving for change in their community.

During it’s time in Pakistan, the Queen’s Baton Relay will visit British Deputy High Commission Karachi, Madressatul Islam University Karachi, Mazar-e-Quaid-e-Azam, Karachi Grammar School and Moulana Muhammad Ali Johar Park (Kakri Ground), Karachi and will experience the celebrations by the local communities including students, athletes and notables from all sections of society. The Queen’s Baton will be carried by squash legend Jahangir Khan and wrestling champions Muhammad Inam. The Queen’s Baton will arrive in Pakistan having previously visited Seychelles. Since its inaugural appearance at the Cardiff 1958 Commonwealth Games, the Queen’s Baton Relay has been a tradition for the Commonwealth Games. The Birmingham 2022 Queen’s Baton Relay started at Buckingham Palace on October 7, 2021, when Her Majesty The Queen placed her message to the Commonwealth into the Baton and passed it to four-time Paralympic gold medallist and Team England athlete Kadeena Cox, who had the honour of being the first of thousands of baton-bearers to carry the Baton.

Fatima Lakhani, Chairperson of organizing committee of QBR event in Pakistan, said: “I am delighted that Pakistan is a part of this extraordinary journey. It’s a way to highlight and promote the beauty of Pakistan to people across the Commonwealth.” Arif Hasan said: “We are looking forward to celebrating the arrival of the Birmingham 2022 Queen’s Baton Relay in our community and are well on track with our planning for the occasion. Everyone here is excited to get involved with the festivities and to cheer on the baton-bearers.” The 16th official Queen’s Baton Relay is an epic journey covering the entirety of the Commonwealth as it will travel to all 72 nations and territories, covering a distance of 140,000 kilometres. For 269 days, the Baton will travel to Europe, Africa, Asia, Oceania, the Caribbean and the Americas, before it embarks on the final stretch of its journey across England for 25 days. The Queen’s Baton Relay will complete its journey at the opening ceremony of the Birmingham 2022 Commonwealth Games on July 2022. This is a traditional and fundamental part of the Games and the Opening Ceremony, as the final Batonbearer will pass the Baton back to The Queen. The Queen’s message to the Commonwealth will then be removed from the Baton and read aloud, marking the official start of the Birmingham 2022 Commonwealth Games.