Farrukh asks Fazl to support EVMs for getting rid of rigging 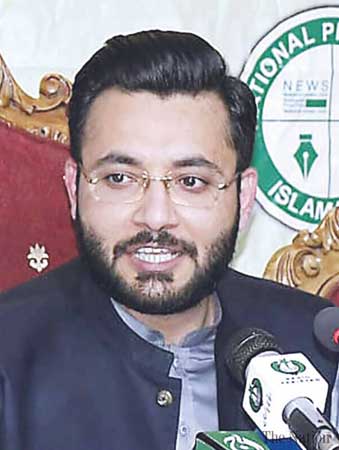 Minister of State for Information and Broadcasting Farrukh Habib on Monday asked Jamiat Ulema-e-Islam-Fazl (JUI-F) Chief Maulana Fazlur Rehman to support the government’s initiative of the Electronic Voting Machines (EVMs) for getting rid of rigging in elections for once and all.

“Maulana Sahb! Support the EVMs if you want to get rid of rigging,” the minister said in a news statement while responding to media talk of the JUI-F chief.

He said Maulana Fazlur Rehman should thank Prime Minister Imran Khan who ensured free and fair elections in the country during his tenure. PM Imran Khan joined the politics to abolish the system tainted with rigging, he added.

The minister lashed out at Maulana Fazlur Rehman for declaring only those elections as free and fair that were won by his party. He said the JUI-F chief indulged in hatching conspiracies against a democratically elected government.

The major problem faced by Maulana was that he was not getting any monetary benefit [from the system] since the Pakistan Tehreek-e-Insaf (PTI) came into the power, he added.

Farrukh said Maulana Fazlur Rehman, Pakistan People’s Party and Pakistan Muslim League-Nawaz had no capacity to run the country as they only resorted to corruption whenever came into the government.

Criticizing the JUI-F chief for feeding lies to the public against PM Imran Khan, he said Maulana had no right to speak against the prime minister who had been declared ‘truthful’ and ‘righteous’ [by the court]. He said everybody knew that the parties to the alliance-Pakistan Democratic Movement had lost popularity in the public and doomed to get failed in achieving their nefarious designs.

Farrukh chided Maulana over his failure to persuade opposition over en masse resignations from the assemblies and said, “Those who are threatening to [launch] march should tell that first where are their resignations.”

He said the planned march of opposition against the government would not have any representation of the public. He said the PTI formed the government after getting record votes in general elections of 2018. He expressed the confidence that it would get more votes in 2023 elections on the basis of its performance.

Earlier, Farrukh Habib said that extraordinary meeting of the Council of OIC Foreign Ministers on Afghanistan would yield positive results.

He was talking to media at Islamabad Airport along with Organization of Islamic Cooperation Secretary General Hussain Ibrahim Taha who left on Monday. Delegations from Indonesia, Jordan, Kyrgyzstan, Kazakhstan, Bangladesh and Sierra Leone also left.

Farrukh Habib thanked Secretary General of OIC for coming to Pakistan and attending OIC Foreign Ministers meeting. The minister of state said that human tragedy has arisen in Afghanistan and a strong voice was raised from the OIC platform to prevent this tragedy.

The OIC platform has sent a clear message to the world, he said, expressing the hope that special representative nominated on Afghanistan will play an active role in provision of assistance to Afghan people.

The minister hoped that Afghan Special Representative will also implement the decisions made at this conference.