* Yet there, in early December, was the inimitable Ahmed at the Los Angeles premiere of the new genre-bending film 'Encounter' dressed in a sleek, pink knee-length kurta 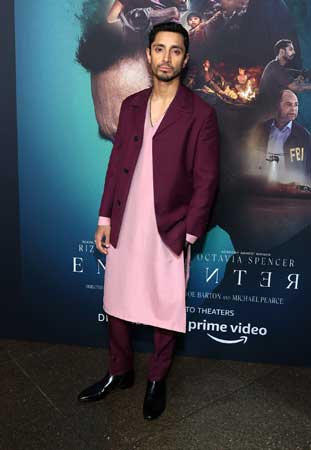 “A kurta by any other name is just as dope,” British-Pakistani actor-musician Riz Ahmed said last week, speaking from his home base in London.

Ahmed was referring to a flowing long shirt that’s more ubiquitous than a hoodie in many South Asian communities, although one that is seldom spotted at movie premieres beyond the reaches of Bollywood.

Yet there, in early December, was the inimitable Ahmed at the Los Angeles premiere of the new genre-bending film “Encounter” dressed in a sleek, pink knee-length kurta, V-necked and worn beneath a Bordeaux-coloured mohair jacket. The kurta was made by Prada and Ahmed’s decision to wear one was an object lesson in the politics of style.

Responding to a reporter’s query about the garment, Prada referred to it simply and generically as a long silk shirt. Yet the nomenclature matters because, as Ahmed explained, code-switching as a survival strategy was once necessary for him, though broader understandings – and equity initiatives within his industry – have slowly “stretched” a culture that took its sweet time getting around to diversity.

Born and raised in northwest London, in a family of Pakistani origin, Ahmed was educated at Oxford and has spoken openly of the alienation he experienced there. Thus for him, wearing a kurta to a movie event was both an act of reclamation and, equally, a chance for him to tweak “Eurocentric and precolonial” notions about what masculinity means.

“Growing up, I might be wearing a shalwar kamiz and then switch into my suit-and-tie English uniform, and then skip class to hang with my boys in Reeboks and an off-key print shirt from Moschino, probably fake,” Ahmed said. “These days, I’m becoming more and more interested in not having to leave part of myself at the door as I enter a room.”

These days Ahmed, of course, has his pick of designers eager to associate themselves with an actor who, following his intense and nuanced performance in “Sound of Metal,” is so much in demand he has become a regular red carpet presence. “Wearing a kurta to a premiere signals to the world what kind of space that is now and what is acceptable in that space,” Ahmed said. “This is something we’ve both thought about a lot.”

The other person he was referring to is Julie Ragolia, an influential stylist Ahmed has collaborated with for the last few years. Reached on the phone in Madrid, where she was styling an advertising campaign, Ragolia explained that in her work she tries to sneak in subtle gestures grounded in the philosophy studies of her prefashion years.

“There’s always an element of the political,” she said, and a case in point is a recent cover of the Sunday Times of London’s Style magazine for which she outfitted Jake Gyllenhaal in a fuzzy grandpa pullover from Prada. The sweater selection itself was uncontroversial, yet the colour, a shade of pink traditionally reserved for teen girl diaries and baby girl onesies, was still startling when worn by a hunk.

Ahmed’s approach, he said on the phone, is more easygoing. “If I’m really, really honest with you,” he said, “what I want is to be unapologetically myself.”

Publicly presenting that self in its varied dimensions may be progressive all on its own. “Think about it,” Ragolia said. “Once upon a time, Riz in a kurta would have immediately put him in a box: Muslim actor.”

“We’ve wanted to do a kurta on the red carpet for a while,” she said. It was not until midway through the obligatory step-and-repeat at the “Encounter” premiere that Ragolia had what she referred to as her, “Hell, yeah!” moment, though the language she used was saltier.

As the cameras flashed and the actors clocked through their paces, Ragolia observed how elegant Ahmed looked in his Prada kurta and how welcome it was to see something on a red carpet besides a designer tuxedo. “It was like: That’s sexy. That’s hot. I bet people are saying, ‘I’d wear that.'”