* Member states reiterate commitment to help bring peace, security, stability and development to Afghanistan
* Resolve to work with UN to try to unlock frozen Afghan assets in a bid to tackle growing humanitarian crisis
* IDB to lead the effort to free up assistance by first quarter of next year 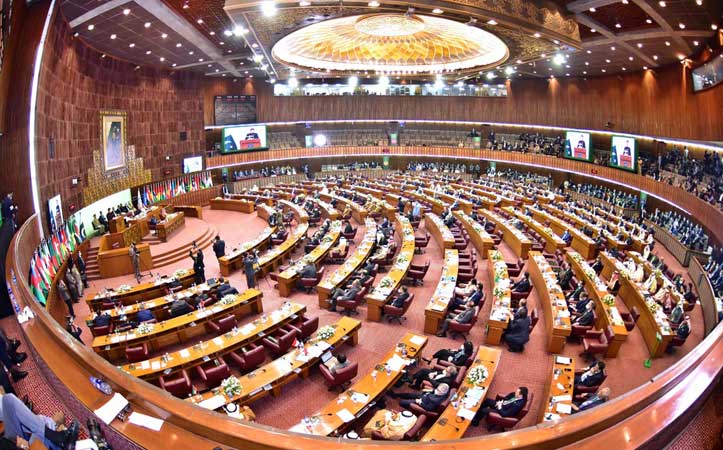 A specially convened meeting of the 57 member states of the OIC Sunday vowed to play a leading role in delivery of humanitarian assistance to the people of war-torn Afghanistan and unanimously agreed on establishing a humanitarian Trust Fund, launch a Food Security Programme and engage with the World Health Organization for securing vaccines and medical supplies.

The meeting of the 17th Extraordinary Session of the OIC Council of Foreign Ministers, held on the initiative of Saudi Arabia and hosted by Pakistan was attended by around 70 delegates from the member states, international aid agencies and special representatives.

The unanimously adopted Joint Resolution brings a glimmer of hope for the 22.8 million people – more than half the population of Afghanistan – who face acute food shortage; while 3.2 million children and 700,000 pregnant and lactating women are at a risk of acute malnutrition.

The document adopted after day-long deliberations here at the Parliament building also expressed solidarity with the Afghans and reiterated the commitment of the OIC Member States to help bring peace, security, stability, and development to Afghanistan. The extraordinary meeting was convened as the UN’s estimates warned that 60% of Afghanistan’s 38 million people face “crisis levels of hunger” and that the situation was getting worse every day. The OIC also expressed deep alarm at the deteriorating humanitarian crisis in Afghanistan.

Prime Minister Imran Khan in his keynote address warned; “Unless action is taken immediately, Afghanistan is heading for chaos.” He said “chaos suits no one” and urged the world to understand the gravity of situation and reach out to the Afghan people who were facing starvation. The Council of Foreign Ministers also took into account the fact that the United Nations High Commission for Refugees, has pointed that 665,000 people have been newly displaced within Afghanistan between January and September 2021 – in addition to the 2.9 million people already internally displaced by conflict in Afghanistan. Expressing deep concern over the breakdown of Afghanistan’s health system, disease outbreaks and severe malnutrition, in particular in the face of Covid-19 pandemic, the OIC decided to establish a Humanitarian Trust Fund, under the aegis of the Islamic Development Bank; which would serve as a vehicle to channel humanitarian assistance to Afghanistan including in partnership with other international actors.

The Council of Foreign Ministers decided that the OIC General Secretariat, together with the Islamic Development Bank and Humanitarian Trust Fund, shall commence discussions with the UN system organizations to device a road map for mobilizing actions in relevant fora to unlock the financial and banking channels to resume liquidity and flow of financial and humanitarian assistance. It would also devise a mechanism for the disbursement of urgent and sustained humanitarian assistance to the people of Afghanistan.

The meeting expressed deep alarm at the worsening economic situation in Afghanistan, which it pointed was further compounded by the continued freeze of overseas Afghan assets as well as other international assistance, exacerbating the urgent cash-flow problems, including payment of remuneration to public officials, and hindering the provision of essential public and social services to the people of Afghanistan.

The moot, which was also addressed by Foreign Ministers of Saudi Arabia, Turkey, Niger, Jordan, OIC Secretary General, UN’s Emergency Relief Coordinator, President Islamic Development Bank, warned that an economic meltdown in Afghanistan would lead to a mass exodus of refugees, promote extremism, terrorism, and instability, with dire consequences for regional and international peace and stability.

The Council of Foreign Ministers commended Pakistan and Iran’s hospitality, in hosting millions of Afghan refugees for over four decades. It also pointed that millions of Afghan refugees are already residing in the neighbouring countries and beyond due to the protracted conflict and ensuing economic and social challenges spanning over 40 years. The meeting stressed upon the need to support Afghanistan in addressing poverty, creating employment opportunities, and provision of essential services to its citizens, in particular food, clean water, quality education, health services.

It also urged the OIC Member States, international donors, the UN Funds and Programmes and other international actors to generously contribute to the Afghanistan Food Security Programme. The meeting reiterated its call on the OIC Secretary-General to engage with donor financial institutions to provide necessary humanitarian and economic assistance to Afghanistan as well as Afghan refugees in neighbouring countries.

An urgently appeal was also made to OIC Member States, international community including the UN system, international organizations, and international financial institutions to continue to provide all possible and necessary recovery, reconstruction, development, financial, educational, technical and material assistance for Afghanistan as policy tools to promote realization and enjoyment of fundamental rights and freedoms by all Afghan citizens.

The Islamabad moot also decided to appoint Ambassador Tarig Ali Bakheet, Assistant Secretary General for Humanitarian, Cultural and Family Affairs at the OIC General Secretariat, as Special Envoy of the Secretary General of the Organization of Islamic Cooperation (OIC) for Afghanistan, to coordinate aid and assistance efforts, and mandated to pursue economic and political engagement with Afghanistan, and to submit periodic reports.

The council of foreign ministers recalled the efforts exerted by Indonesia to highlight the grave humanitarian situation in Afghanistan, on the margins of the United Nations General Assembly and the shared attention and concern by the Muslim countries to make headway in addressing the humanitarian situation in Afghanistan. The OIC was guided by the principles and objectives enshrined in the Charter of the Organization of Islamic Cooperation (OIC), and the relevant resolutions of the Islamic Summit, Council of Foreign Ministers, and the Final Communique of the Open-Ended Extraordinary meeting of the OIC Executive Committee at the level of Permanent Representatives held in Jeddah on 22 August 2021 on the situation in Afghanistan. The delegates acknowledged that the Makkah Declaration adopted by more than 1200 eminent Islamic scholars at the International Conference of the Muslim World League held in Makkah in 2019, recognized the deep-rooted Islamic values that form the ethos of the Muslim society.

The delegates reaffirmed strong commitment of the OIC member states to the sovereignty, independence, territorial integrity and national unity of Afghanistan.

While recalling that the current humanitarian, social and economic situation was, inter alia, linked to the prolonged conflict in Afghanistan, they underlined the importance of investing in human development for achieving sustainable peace and development in the country.

The expressed solidarity with the people of Afghanistan, reiterating the commitment of the OIC member states to help bring peace, security, stability, and development to Afghanistan.

The members noted necessity for continuation of economic cooperation to improve humanitarian situation in Afghanistan and in this regard called for implementation of large-scale energy, transport and communication projects including the TAPI pipeline, Turkmenistan-Afghanistan-Pakistan (TAP) electricity transmission line, to create new opportunities for increasing social well-being of the Afghan people. The participants noted the importance of the 15th Summit of the Economic Cooperation Organization, which took place in Ashgabat on 28 November 2021, and the Ashgabat consensus for actions adopted at this Summit to address the humanitarian issues in Afghanistan.

The OIC ministers recognized disproportionate impact of Afghanistan’s humanitarian situation on its neighbouring countries, especially in terms of fresh influx of refugees and irregular migration. It was recalled that millions of Afghan refugees were already residing in the neighbouring countries and beyond due to the protracted conflict and ensuing economic and social challenges spanning over 40 years.

They reaffirmed the importance of protecting and respecting the right to life, security, and dignity of the people of Afghanistan in compliance with the Islamic principles and the Universal Declaration of Human Rights (UDHR). The OIC delegates emphasized the importance of establishing inclusive governmental structures which adopted moderate and sound domestic and foreign policies, with a friendly approach towards neighbors of Afghanistan, aimed at realizing the shared goals of durable peace, security, safety and long-term prosperity of Afghanistan and the region.

They also emphasized the importance of meaningful participation of women in all spheres, and upholding human rights, including for women, children and minorities. They stressed that the menace of terrorism remained a grave threat to the peace, security and stability of Afghanistan, regional countries and the international community. The delegates recognized that terrorism had devastating consequences on human rights and fundamental freedoms of victims and their families, in particular women and girls, deploring the suffering of the people of Afghanistan, and reaffirming its profound solidarity with them while stressing the importance of providing them with proper support and assistance. They also stressed that the Afghan territory must not be used as a base or safe haven for any terrorist group. They strongly condemned terrorist attacks claimed by the so-called Islamic State in Khorasan Province (ISKP), an entity affiliated with Daesh, resulting in the loss of numerous precious lives and injuries to many others.

The OIC members welcomed the assurances for the safety and security of the diplomatic personnel and humanitarian workers, and international organizations in Afghanistan as well as grant of general amnesty, refraining from reprisals, and to allow safe passage to all those who wish to travel to and from Afghanistan.

The members commended Pakistan’s pivotal role in the evacuation of over 83,000 people comprising 47 nationalities from Afghanistan.

The council commended the important role played by Qatar, Kuwait, UAE, Iran, Azerbaijan, Turkey, and other countries in facilitating evacuations from Afghanistan.

They underscored the importance for the international community, in particular OIC Member States, not to abandon the people of Afghanistan. The meeting welcomed the presence of the representatives of the United Nations Secretary General, China, the U.S., the UK, France, Russian Federation, Japan, Germany, Italy, European Union, Economic Cooperation Organization, League of Arab States and Gulf Cooperation Council.

Noting the statement delivered by the Representative of the Afghan authorities, the delegates affirmed solidarity of the OIC Member States with the Afghan people in their quest for a peaceful, united, stable, sovereign and prosperous Afghanistan.