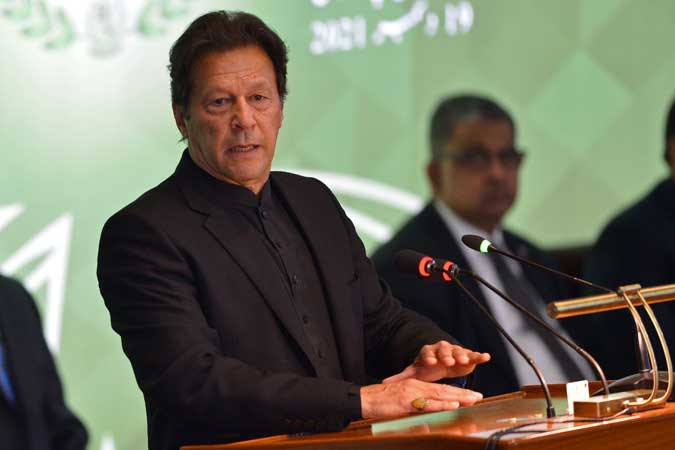 Highlighting the collapsing hospitals and education sector and the falling living standards in Afghanistan, Prime Minister Imran Khan Sunday urged the world to take immediate action, as the war-plagued country was fast heading towards chaos. “Unless action is taken immediately, Afghanistan is heading for chaos. Any government when it cannot pay salaries to public servants, doctors and nurses is going to collapse. But chaos suits no one.

It certainly does not suit the United States,” Imran said in his keynote address at the 17th Extraordinary Session of the Council of Foreign Ministers of Organization of Islamic Cooperation being held in Islamabad. The prime minister said owing to a dearth of resources, if the Afghan government remained unable to counter terrorism, other countries may also face its spillover impact. Convened by Saudi Arabia as OIC chair and hosted by Pakistan to discuss the Afghanistan humanitarian crisis, the session is being attended by around 20 foreign ministers, 10 deputy foreign ministers and 70 delegates. Mentioning the presence of ISIL in Afghanistan, and terror attacks inside Pakistan by it from across the Afghan border, the prime minister said the only way to handle the terror outfit was a stable Afghanistan. He said ISIL was capable of carrying out international attacks. The prime minister said Pakistan had also the same worry having faced the biggest collateral damage of Afghan war with the loss of 80,000 people, a shattered economy and displacement of 3.5 million people. Imran welcomed the delegates in Pakistan and said ironically, Pakistan had hosted the OIC moot on Afghanistan 41 years ago, as no country suffered from conflicts as much as Afghanistan. He said the situation in Afghanistan was also caused by the years of corrupt government, suspension of foreign aid, freezing of foreign assets and dysfunctional banking system which could lead to the collapse of any state. He said if the world failed to act timely, it would lead to the “biggest man-made disaster.” Imran said the OIC had a huge responsibility, as it was our religious duty too to support the suffering Afghan brethren.

The prime minister urged the world not to link their support with the Taliban rather they must think of 40 million people.

However, he said the Taliban would also have to understand that formation of an inclusive government, respect for human rights particularly women, and disallowing the use of Afghan soil for terrorism in other countries would pave way for international aid to Afghanistan. Imran also mentioned his meeting with the interim Afghan foreign minister in which he had categorically assured him of complying with all the aforesaid conditions.

The prime minister however asked the international community to be sensitive to the cultural traditions in Afghanistan as well as adjoining areas in Pakistan particularly concerning the girls’ education. He said in case of violation of their traditions, the families would never send their girls to school even if incentivized but they would willingly do it without any stipend if felt satisfied.

The prime minister said any chaos in Afghanistan would lead to the mass exodus of refugees which would be unaffordable for Pakistan and any other developing country. He said the developed countries had a problem even with a few thousand refugees, so how a developing country like Pakistan could host hundreds of thousands of them.