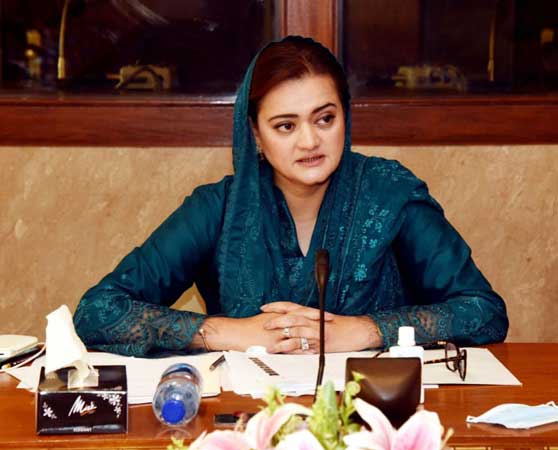 PML-N Secretary Information Marriyum Aurangzeb Sunday criticized Prime Minister Imran Khan for slinging mud at the political parties and economy while the foreign ministers of the Muslim world were arriving in the country. Talking to reporters in Islamabad, she said civilized countries mock Imran Khan for pointing a finger at the opponents despite the fact that he had failed to perform during his almost four-year rule.

She said the country was facing multiple crises and the poor were starving, but Imran was obsessed with Nawaz Sharif, Shehbaz Sharif and the PML-N to the detriment of the country.

Marriyum said despite keeping the Opposition Leader Shehbaz Sharif in jail for over a year on fictitious charges, keeping PML-N leaders in death row cells, abusing power and misusing NAB, FIA and every national institution, Imran could not prove a single penny of corruption against the PML-N leadership, says a news report.

She said the PTI government and its rented touts were embarrassed by the courts every time because they had never had any evidence to back their false cases. She said dozens of mega corruption scandals of the current government had surfaced but the NAB, FIA or any national institution took no action. Imran Khan and his mafias usurped trillions in corruption but none of them was held accountable under this government that pledged to be the so-called flag-bearer of anti-corruption, she added.

She said Imran helped these mafias and cartels because they ran his home and daily expenses.

“How can a person, who is financially compromised and indebted to his financiers, hold anyone accountable? How can such a person be called clean when his existence depends on corruption money of others? How can Imran say no to those who run his house?” she questioned.

Marriyum said Imran was clearly involved in every single act of corruption that robbed the nation.

She said Imran allowed export of sugar and flour when he was explicitly told that there was a shortage in the country.

Marriyum said Imran Khan was not only the most corrupt leader in the history of the country but was by far the only one to facilitate corruption institutionally.

“He does not possess the mental capacity to understand the sensitivity of the OIC Conference and how he should present a positive image of the country to the leaders of the Muslim world.”