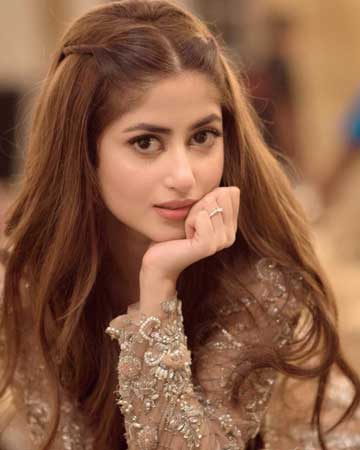 Pakistan acclaimed actor, Sajal Aly’s recent picture has gone viral on social media. Sajal has recently shared a picture on her Instagram handle, which has been quite liked by her fans and has gone viral in just a few hours.

This time, Sajal Aly has also sought some advice from her fans about the picture. The image that was shared on picture and video sharing site, Instagram, features the beautiful actor wearing a nose pin.

‘Khel Khel Mein’ star asked followers for their opinion about her look with the nose pin, which was well complimented by her fans. Post is being reshared by various fanpages of the ‘Sinf-e-Aahan’ actor and has gained numerous likes.

Comments section of the post has been filled with compliments for her beauty, and fans can’t stop admiring her charm.

Recently, her bridal shoot received immense love from fans and got all the deserved hype. She was seen sharing the space with her recent co-actor, Bilal Abbas.

‘Chup Raho’ star is quite active on social media, and shares snippets of her work and personal life, from time to time.

Sajal’s last movie ‘Khel Khel Mein’ with Bilal Abbas Khan came out last month and received a tremendous response from audience. Sajal Aly is currently seen in the mega project, ‘Sinf-e-Aahan’, as Rabia Safeer, along with 6 other girls.