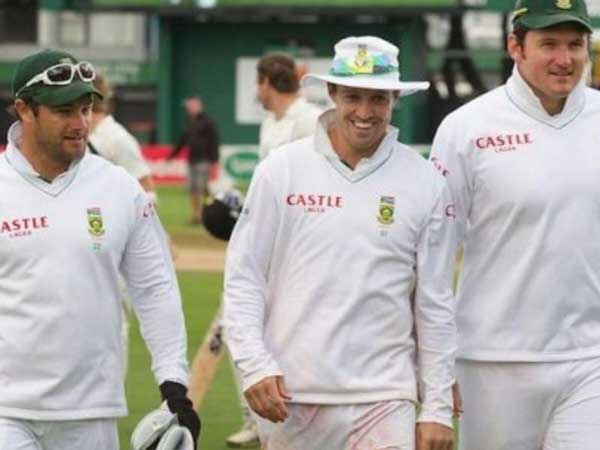 JOHANNESBURG: South African cricket legends Graeme Smith, Mark Boucher and AB de Villiers were all found to have engaged in racially prejudiced conduct in a report by an independent ombudsman released on Wednesday. Cricket South Africa made public a 235-page interim report by Advocate Dumisa Ntsebeza, who headed a Social Justice and Nation Building Commission to investigate allegations of racial discrimination in South African cricket. CSA board chairman Lawson Naidoo said the board would study the report and would “engage with it and its recommendations”. Ntsebeza found that former Test captain Smith’s appointment as CSA’s director of cricket was irregular, although he did not attribute this to racial discrimination.

But he was critical of Smith’s decision to appoint Boucher as head coach of the national team ahead of Enoch Nkwe, a black coach who served briefly as national team director, which he found was not in accordance with the organisation’s human resources policy. “Mr Smith and CSA failed to rebut the presumption of unfair discrimination in the appointment of Mr Boucher ahead of Mr Nkwe,” according to the report. Smith was also accused of racial discrimination, along with other CSA and team officials, when he was captain of the Test team in England in 2012. Following an injury to Boucher, leading batsman De Villiers was selected as wicketkeeper ahead of Thami Tsolekile, a specialist wicketkeeper.

“The (ombudsman) is persuaded by the argument that CSA, its coaches and selectors unfairly disadvantaged against Mr Tsolekile on the basis of his race.” De Villiers was also found to have resisted the selection of Khaya Zondo, a black batsman, when he was South Africa’s one-day international captain ahead of a series-deciding match in India in 2015. Dean Elgar, a late replacement for the one-day games, was picked ahead of Zondo, who was part of the original squad for the series. “The only reasonable conclusion is that Mr De Villiers discriminated against Mr Zondo on racial grounds.”

De Villiers, who announced his retirement from cricket last month, responded on social media. “I have wholly supported the aims of Cricket South Africa’s Social Justice and Nation Building process, to ensure equal opportunities in our game,” he wrote on Instagram and Twitter. “However, throughout my career, I expressed honest cricketing opinions only ever based on what I believed was best for the team, never based on anyone’s race.” Boucher was accused by former teammate Paul Adams of leading a song in after-match fines meetings in which Adams was referred to as a “brown sh**”.

The ombudsman found that Boucher revealed a “lack of sensitivity and understanding of the racist undertones,” and that Boucher attempted to excuse racism because it was done in a team setting and that he does “not comprehend the South African apartheid/discriminatory and racist history.” Naidoo said in a CSA press release that: “We are thus committed to considering the findings and recommendations with an open mind. We will look at the report objectively, having regard to our social justice obligations, and our duties as guardians of the game.” Ntsebeza noted that the commission was “under-resourced” and “operated under extreme strictures of time”. He recommended that the CSA appointed a permanent transformation ombudsman.