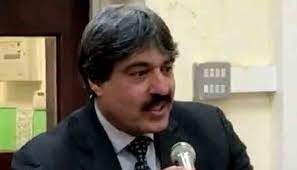 LONDON: At a preliminary meaning hearing of words used in a broadcast by a private Pakistani TV channel about him — the major character in the judge Arshad Malik video scandal — Justice Saini of London’s High Court of Justice ruled in Nasir Butt’s favour.

Butt was accused of threatening and attempting to bribe the late accountability court judge who had convicted former Prime Minister Nawaz Sharif in the assets beyond means case, according to the TV channel.

Butt sued the TV channel for its broadcast on July 11, 2019, in which the channel aired allegations in a news show claiming that Nasir Janjua and Nasir Butt were “pressuring” judge Arshad Malik and had “threatened” and were “trying to bribe” him. At that time, the private TV channel was under different management.

In the same broadcast, the channel had played Shahid Khaqan Abbasi’s defence of Nasir Janjua, but analyst Adnan Adil referred to Abbasi’s explanations as “false statements” and then stated “now these conspiracies are being debunked” before proceeding to make further allegations against Butt: “The people of Pakistan should know about this conspiracy. Has our court system and state apparatus sold itself out? Can anyone sabotage our systems through conspiracies? The public should know what conspiracy took place. They should know about how these characters were involved. They should receive exemplary punishment for this.”

In their arguments before the court, TV channel’s lawyer Barrister Rashid Ahmed and Butt’s lawyer Barrister David Lemer both relied on Mir Shakil-ur-Rahman’s historic defamation case judgment against ARY Network Ltd in 2016 at the London High Court, which has become a benchmark for the determination of the meaning of defamatory in the context of Urdu television broadcasts in the UK.

Justice Saini decided against the channel at the preliminary trial, finding that the meaning of the remarks complained of was that Butt had threatened and attempted to bribe a judge. Justice Saini further found that the words in question were a factual statement and that they defamed Butt under common law. In other words, the judge came up with a Chase level 1 meaning.

Both parties must try to resolve the issue by the end of March 2022, or a trial date will be set in which the broadcaster must prove with proof that Butt was guilty of threatening and attempting to bribe a judge. The channel is said to intend to continue defending the claim. Butt has categorically refuted all of the charges levelled against him.