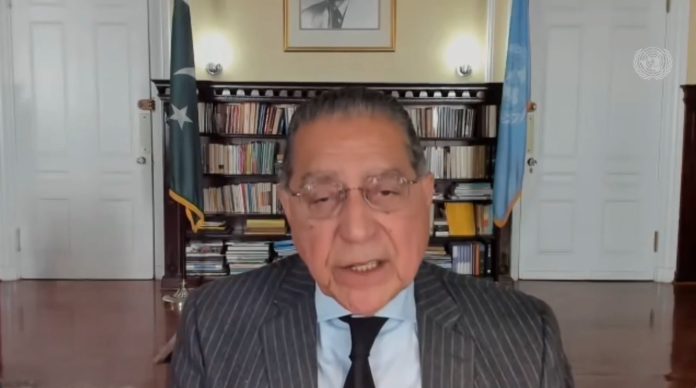 Ambassador Munir Akram, Permanent Representative of Pakistan to the United Nations Tuesday said the priority for developing countries was to recover from the effects of coronavirus pandemic and achieve the sustainable development goals (SDGs).

While delivering a statement at the ECOSOC briefing on the Outcomes of the United Nations Climate Change Conference (COP26), he said, “For the developing countries to recover from the effects of the pandemic and achieve the SDGs, we will require a growth rate of at least 8- 9% over the next several decades, and that goal has to be kept in mind as a priority goal for the developing countries.”

In this regard, he appreciated “the adoption of a wide-ranging set of decisions related to mitigation, adaptation, and finance including the “Glasgow Climate Pact”” at the Glasgow conference. He insisted however, that these small steps were not enough to stop climate change and to avert the looming existential threat that was heading our way. He drew attention of the participants to the concerns where the Glasgow Conference fell short of the developing countries’ expectations.

He expressed his concern that “the mitigation decisions were focused on future emissions without addressing the historical and past emissions of the developed countries, which are responsible for the climate crisis”. He suggested in this regard that “the aim for the additional integration commitments – to be submitted in the more ambitious NDCs in 2025 – should be on the developed countries”.

He said that at the Conference, although “We were also able to keep alive the goal of limiting global temperature rise to 1.5 degrees by calling for more ambitious mitigation commitments for 2025”, “It is our expectation that those mitigation actions will come mostly from the developed countries, and they will not impede the development path of the developing countries,” he said.

“We are glad that adaptation financing will be doubled. We hope that this will form a part of the annual ministerial review.”

Regarding the principles of Equity, Common but Differentiated Responsibilities and Respective Capabilities (CBDR-RC), he insisted that “should be properly reflected in the operational parts such as mitigation, integration, and adaptation”.

He insisted that the “concrete decisions are needed on the level, modalities, and implementation of the developed countries’ climate finance commitments, without which there can be no constructive progress on climate action”.

While speaking at the UN General Assembly, the ambassador said the oppressed people of Kashmir, India and Palestine wanted to see hope from the United Nations on the issue of self determination.

He said peace settlement of disputes was the way forward for the world.