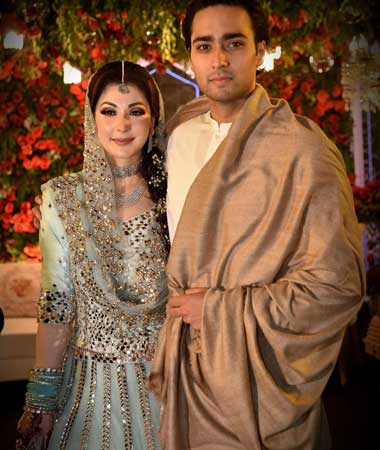 The event was attended by various political personalities including Hamza Shehbaz and others.

The event kicked off at 5pm in Mansehra’s Chak Shehzad. During the whole of the ceremony, Captain retired Safdar, Maryam Nawaz and Junaid Safdar were seen humming Mehndi songs while the mother of the groom entered the bride’s house by singing the famous traditional song, “ye pela jora, ye hari hari churiyan” The video of Maryam’s signing has gone viral since it was shared on social media.

‘RESPECT PRIVACY’ — Maryam Nawaz, earlier, had asked everyone to respect their right to privacy after videos, related to wedding events of her son Junaid Safdar, have gone viral on social media.

Taking to Twitter from her personal Twitter handle, Maryam Nawaz said that her son’s wedding is a private, family affair and like all mothers, she deserves a chance to celebrate the occasion without attracting political commentary.

“I humbly request media and everyone else to respect the family’s right to privacy,” she added.