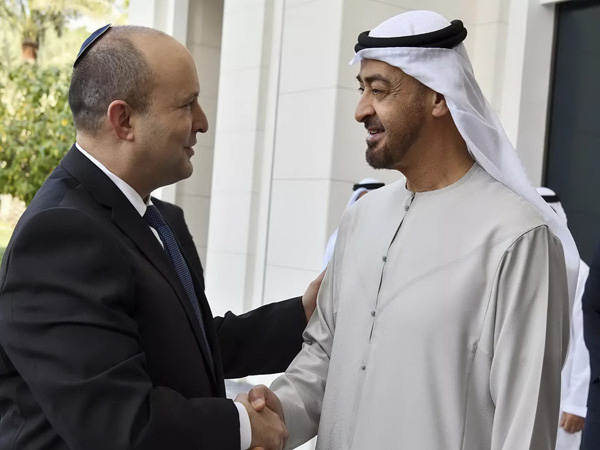 Israeli Prime Minister Naftali Bennett met Abu Dhabi’s crown prince Monday during the first visit by a leader of the Jewish state to the United Arab Emirates, just over a year after the two countries established ties.

Bennett’s visit comes as Israel pursues a diplomatic push against international nuclear talks in Vienna that could ease sanctions on its arch-foe, Iran.

He was received by Crown Prince Sheikh Mohammed bin Zayed Al-Nahyan at his private palace, where they exchanged greetings before heading inside for more than four hours of talks, Israeli officials said.

The visit comes 15 months after the wealthy UAE broke with decades of Arab consensus and forged diplomatic ties under a series of US-brokered deals known as the Abraham Accords.

Bennett, who arrived late on Sunday, said his trip reflected a “new reality” for the Middle East.

“In my opinion, this is… the new reality this region is witnessing, and we are working together to ensure a better future for our children,” he told WAM.

Israel is also stepping up its diplomatic efforts against the renewed talks in Vienna with Iran, over the Islamic republic’s nuclear programme.

Bennett has called for the talks to be halted, accusing Tehran of “nuclear blackmail” and charging that it will use any revenue from sanctions relief to bolster a military arsenal that can harm Israel.

On Thursday, global powers began meetings with Iran in Vienna aimed at reviving a deal to curb the nuclear programme after former US president Donald Trump pulled out in 2015.

Ahead of those talks, the UAE’s national security adviser met Iran’s ultraconservative President EbrahimRaisi in Tehran, a rare trip by a senior Emirati official.

The Israeli prime minister also spoke of “limitless future opportunities” to develop trade with the UAE.

“Israel, like the UAE, is a regional hub for trade. Our cooperation provides unprecedented economic opportunities not only for us, but for more countries,” he was quoted as saying.

The UAE last year became the third Arab nation to establish full diplomatic relations with Israel after Egypt and Jordan, and was swiftly followed by Bahrain and Morocco.

Sudan also agreed to normalise ties with Israel under the Abraham Accords, but full relations have not yet materialised.

The agreements were negotiated by Bennett’s predecessor, Benjamin Netanyahu, who said they would offer Israel new regional allies against Iran and bolster its diplomatic efforts to stop Tehran from acquiring nuclear weapons.

Iran claims it only wants to develop a civilian nuclear capability but Western powers say its stockpile of enriched uranium goes well beyond that, and could be used to develop an atomic weapon.

On Sunday, the G7 grouping of the world’s richest nations warned time was running out to renew the deal with Iran.

The Vienna talks were Iran’s “last chance to come to the negotiating table with a serious resolution”, said Foreign Secretary Liz Truss, from G7 host Britain.