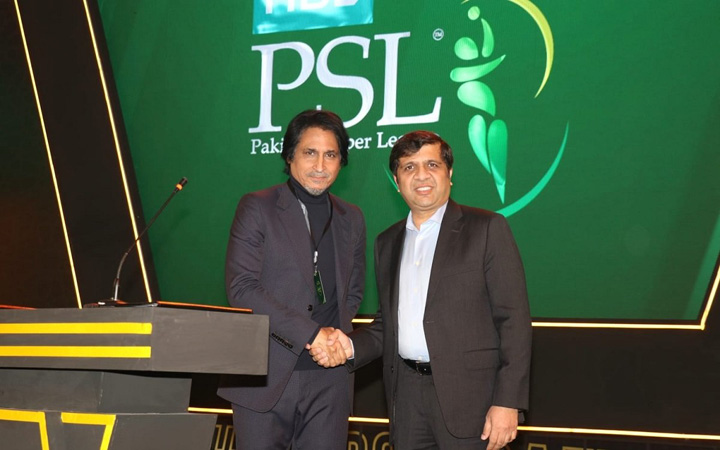 LAHORE: The Pakistan Cricket Board (PCB) and Arif Habib Group on Sunday signed a Memorandum of Understanding for the installation of drop-in pitches. This partnership is aligned to PCB Chairman Ramiz Raja’s vision of improving the quality of pitches, which, in turn, will help budding cricketers to improve their techniques and produce improved performances on overseas tours. The partnership was signed between the Arif Habib Group and the PCB during the Pakistan Super League 7 draft. The Arif Habib Group, as part of their commitment to contribute to Pakistan Cricket by improving cricket facilities and infrastructure, will sponsor two drop-in pitches and has also offered the PCB access to its cricket stadium, which is located in the Naya Nazimabad area in Karachi.

As per the agreement, Arif Habib Group will install drop-in pitches at Naya Nazimabad Cricket Stadium and one more at a location to be identified and confirmed by the PCB in due course. The process for the procurement of drop-in pitches is expected to be completed in 2022. Once the upgradation is complete, the PCB will host and organise domestic matches at the Naya Nazimabad Stadium including U19 and women’s matches while practice sessions and exhibition matches for the HBL Pakistan Super League franchises can also be staged at the stadium from the 2023 edition onwards.

Chairman PCB Ramiz Raja said: “The installation of drop-in pitches is surely going to benefit our players both at the domestic and international levels. Over the years, we have struggled to cope with the extra bounce and pace that some of the pitches in Australia and New Zealand provide. “Despite abundance of talent and ability, we are yet to win an away Test series in Australia while our record in New Zealand has also taken a beating in recent trips. I want to thank Mr Arif Habib for coming forward and helping us in this regard. The Arif Habib Group has a keen interest in cricket which is apparent from the quality cricket facility that they are developing in Karachi. I am sure both PCB and Arif Habib Group will mutually benefit from this agreement in the years to come, as this deal has enormous potential that will come to fruition in due course.” Chairman Arif Habib Group Arif Habib said: “We are delighted to partner with the PCB for the exciting drop-in pitches plan which will help our present and future stars especially while preparing for the challenges of playing and performing abroad. “The Arif Habib Group is fully aligned with the PCB’s vision. Soon after taking charge Chairman Ramiz Raja met us in Karachi and we were impressed with his vision for Pakistan cricket which made us commit to this initiative as we believe this is a new beginning for cricket and the cricket economy in the country. “We have already taken significant steps for the game of cricket as we know it is the passion point for the entire country; the Naya Nazimabad Cricket Stadium is a testament of our commitment to the cause. After this collaboration with the PCB, we will step-up our efforts to ensure that the stadium meets the requirements of top-cricket in terms of the pitches, outfield, infrastructure and spectator comfort so that the stadium can host exciting cricket games.”