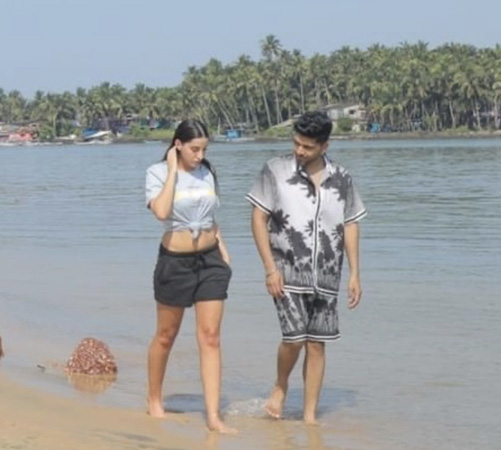 The romance is in the air of Bollywood as prominent celebrities are getting married and announcing their relationships on social media.

However, this time around, fans have speculated another blooming romance in the tinsel town after pictures of Nora Fatehi and Guru Randhawa have gone viral on Internet.

The latest pictures of the Dilbar famed girl, enjoying private beach time with Punjabi pop singer in Goa have taken the Internet by storm. The duo’s fans have been left wondering if the two are dating?

In the pictures, the Saki Saki starlet and the Sui Suit crooner can be seen smiling their heart out as they take a stroll by the beach shore. Nora, 29, can be seen dressed in a sky blue t-shirt that she tied up in the middle – making it a cropped top. She paired it up with a pair of black shorts and left her hair open. On the other hand, the Naach Meri Rani hitmaker was clad in a black and white beach-themed co-ord set.

Reacting to the pictures, fans speculated if the ‘two are dating’ each other and flooded the comments section of the post. On the work front, Guru, who was part of Salman Khan’s recently concluded ‘Da-bangg’ tour, is working on various upcoming projects. Nora, on the other hand was last seen in Kusu Kusu song from John Abraham starrer Satyameva Jayate 2.