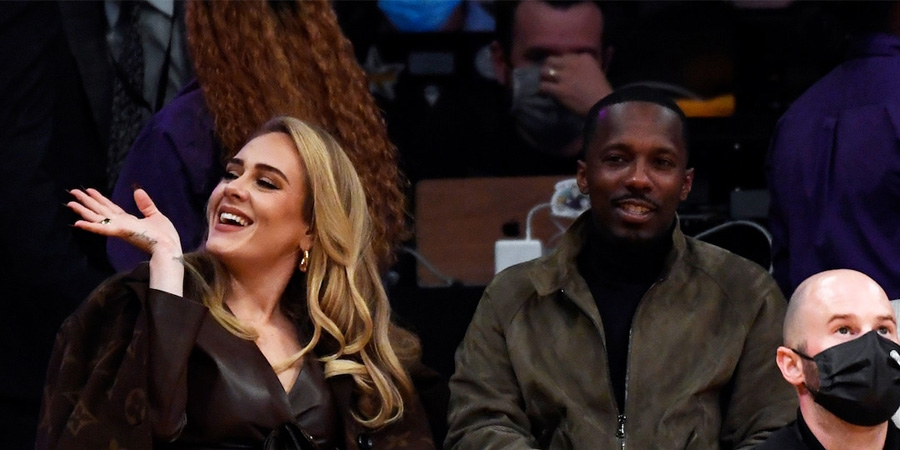 Adele’s going to be “Chasing Pavements” with the most stylish shoes.

“Amazing!” Adele captioned her Instagram Stories. “Congratulations @richpaul.” Along with her sweet message, the “Easy on Me” singer posted photos of herself wearing the white shoes, which featured blue and yellow accents, as well as her boyfriend’s name emblazoned on the tongue.

In one image, the “Easy on Me” singer kicked her feet up high and posted an animated heart emoji.

The couple, who first sparked romance rumors in July when they were spotted looking cozy at the NBA Finals, have mostly kept their relationship out of the public eye.

However, during CBS’ Adele One Night Only special on Nov. 14, the 33-year-old English star shared rare insight into their new romance.

“I met him at a birthday party, we were on the dance floor,” she told Oprah Winfrey during the special about her and Rich’s first-ever encounter. “And then we met a couple of years later.”

She continued, “We went out for dinner, which he says was a business meeting and I’m like ‘A business meeting about what?’ And then it was the first time we hung out on our own. Without friends and I think that was a natural way that people would meet each other in real life.”

Adele opened up about what attracted her to the sports agent, telling Oprah, “He’s just hilarious. He’s so funny. And very smart. Very, very smart. It’s quite incredible watching him do what he does and just the easiness of it and very smooth.”

The couple began dating four months after Adele finalized her divorce from ex-husband Simon Konecki, with whom she shares 9-year-old son Angelo. During her interview with Oprah, the singer explained why her current romance is different from her past ones.

“[It’s] the first time I’ve loved myself and been open to loving and being loved by someone else,” she said. “Yeah, by arriving and turning up. Maybe I’m getting a different version of him as well. It’s just timing.”

According to the “Rolling in the Deep” singer, she doesn’t “treat love like a game anymore.”

“You know that thing that, ‘You’re going to hurt me so I’m gonna hurt you first?’ I’m not like that anymore,” she admitted, adding that her new outlook is all about, “Peace of mind and stability. I don’t have to expect someone else to give me stability. I can also be stable by myself. A solid house that doesn’t blow over in a storm.”