* Marriyum says govt robbing people, making them unable to even pay their power bills
* Gill says Sharif family and their 'courtiers' have no place in politics 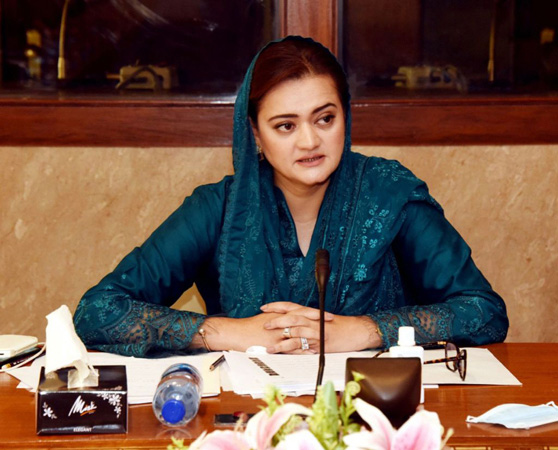 Pakistan Muslim League-Nawaz (PML-N) spokesperson Marriyum Aurangzeb Sunday again slammed the government for filing money laundering cases against the Opposition Leader and party President Shahbaz Sharif, terming them ‘false’. Addressing a press conference in Islamabad, Marriyum said Nawaz Sharif and Maryam Nawaz were also put in jail illegally. “Likewise, the government tried to put Shahbaz Sharif in jail but nothing was proved against him,” she claimed.

Without naming any individual or institution, Marriyum Aurangzeb said Bashir Memon had been called and especially instructed to maneuver cases against the PML-N leadership, adding that it was on record that Memon had objected to those recommendations but despite that the PML-N leaders were put behind the bars.

“After all, the Supreme Court granted bails. The NAB withdrew petitions from the high court and PTI would face an open defeat,” the spokesperson asserted. Shahbaz Sharif himself said if corruption was proved against him, then he would quit politics and also apologize to the nation.

Marriyum Aurangzeb said in the present regime, people’s pockets were being robbed, as they were even unable to pay their bills.

“All corruption factions who were on containers in 2018 are looting the masses today while sitting in power,” she recalled.

She asserted that confessions had been obtained through torture after which Daily Mail had to apologize. Earlier, PML-N Punjab President Rana Sanaullah also lashed at the government saying those who ‘assisted’ in the appointment of an inept government in the country should now ‘help’ the nation throw it out. “What will happen to the country’s economy if the dollar’s value surpasses 200? What will be the fate of the poor and the salaried?” He said an “incompetent gang” was leading the country to “destruction”, adding that they had no option but to follow the TLP protest model if the government forced the use of EVMs.

He added that if the people did not stand and overthrow the incompetent leadership, the country will face an irreparable damage.

He said those who “imposed” the incumbent, inept government should “fear God” and “have mercy on the nation”.

Sanaullah said people should heed the opposition’s voice and take a stand against the government, adding that slogans like “respect the vote” literally meant that people had the right to vote.

Commenting on the recent remarks of the PPP Co-chairman, Sanaullah said Asif Zardari was a high-ranking politician and he should have picked more appropriate words while speaking about Nawaz Sharif. Meanwhile, Special Assistant to the Prime Minister on Political Communication Dr Shahbaz Gill Sunday said the Sharif family and their courtiers had no place in politics.

In response to the statement of Marriyum Aurangzeb, he said they were reaping the crop harvested by thieves who remained in power for three decades, reports APP.

“People had settled the RTS of incompetents,” he added. Gill said people had full confidence in the government. “Marriyum Aurangzeb should give an account of corruption of her masters instead of waging propaganda, he added.

He asked when those who plundered the national wealth and went for taking medicines would return to the country. “When will the then finance minister return, who left the country during the tenure of incompetent? Nawaz Sharif and Ishaq Dar should return and honor the Pakistani courts,” he said.