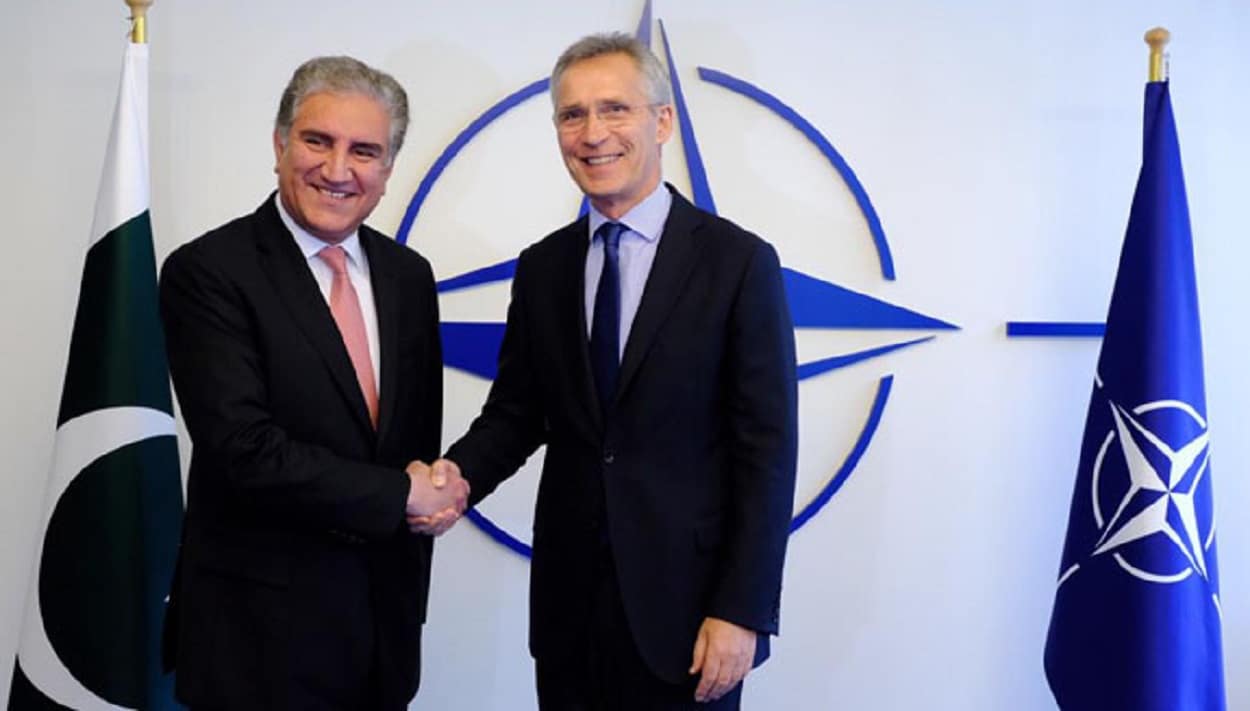 During the meeting, the minister raised concerns over slumping situation in Afghanistan, urging the world to provide humanitarian and economic assistance to the country.

The meeting between the two officials took place at the NATO headquarters in Brussels.

Pakistan wishes to resolve all outstanding issues including the Jammu and Kashmir dispute through dialogue, FM Qureshi said during the meeting.

Matters of bilateral cooperation, the emerging situation in Afghanistan as well as other matters of mutual interest including the situation in the region were discussed during the meeting.

Referring to his June 2019 meeting with the NATO secretary-general, the foreign minister said that high-level political and military contacts have played important role in the strengthening of bilateral cooperation in matters of mutual interest.

He said there was a need for the international community to make serious efforts to provide humanitarian and economic assistance to the people of Afghanistan.

FM Qureshi said that the cooperation of the international community with the Taliban was essential to check the possibility of people’s migration from Afghanistan and saving the country from becoming again a safe haven of terrorists and the hub of narcotics.

He maintained that Pakistan was hosting an extraordinary meeting of the OIC Council of Foreign Ministers on December 19 to attract the attention of the international community towards the emerging humanitarian crisis in Afghanistan.

FM Qureshi and High Representative of the European Union for Foreign Affairs and Vice President Josep Borrel co-chaired the 6th round of Pakistan-EU Strategic Dialogue here on Tuesday.

During the strategic dialogue, multi-dimensional bilateral relations between Pakistan and the European Union were discussed in detail.

Apart from deliberating on bilateral trade, investment and other related matters, the two sides also exchanged views about the matters concerning regional peace and stability including the situation in Afghanistan.

The High Representative for Foreign Affairs and Security Policy and Vice-President of the European Commission (HR/VP), Josep Borrell and Foreign Minister of the Islamic Republic of Pakistan, Makhdoom Shah Mahmood Qureshi, co-chaired the sixth round of the EU-Pakistan Strategic Dialogue in Brussels on December 7, 2021.

Foreign Minister Qureshi and HR/VP Borrell reviewed the ongoing cooperation between Pakistan and the EU, based on the Strategic Engagement Plan. They agreed to further enhance EU-Pakistan mutual engagement, especially on security and regional cooperation.

“Both sides agreed to hold the first meeting of the new EU-Pakistan Security Dialogue with sub-groups on Non-proliferation and Disarmament, and Counter-terrorism in 2022,” reads the joint press release. “The EU welcomed the progress made by Pakistan to implement the Financial Action Task Force Action Plans and the ongoing efforts to address the remaining actions.”

The HR/VP and the foreign minister reaffirmed their resolve to strengthen and protect human rights as well as fundamental freedoms, focusing on freedom of religion and belief, inter-faith harmony, religious tolerance and peaceful coexistence, and rights of minorities.

During the meeting, the Pakistani foreign minister raised concerns at the rising trends of Islamophobic acts, xenophobia and religious intolerance in the world and the need for common resolve to counter them.

Both sides expressed a strong political commitment towards the GSP+ and the implementation of 27 international conventions on human rights, labour rights, protection of the environment and good governance that are linked to it.

The HR/VP raised concerns on the death penalty and the misuse of the blasphemy law. The HR/VP also expressed appreciation for the adoption of the Protection of Journalists and Media Professionals Bill by the Parliament of Pakistan and hoped that the Anti-Torture Bill and other human rights-related legislation that are before the Parliament would be adopted soon.

They also welcomed the continued cooperation with Pakistan on electoral matters. High Representative Borrell informed Foreign Minister Qureshi about the upcoming follow-up visit of the EU Election Observation Mission to Pakistan of 2018.

HR/VP Borrell and Foreign Minister Qureshi talked about the importance of decisive global action on climate adaptation and building climate resilience, and the importance of developed countries taking the lead in mobilising climate finance, noting the significant role of public and private funds, and technology to facilitate the transition. HR/VP Borrell welcomed Pakistan’s pronouncement, prior to the Glasgow conference, of its Nationally Determined Contribution to reaching the common climate objectives.

Both sides on same page for ‘sustained engagement’ with Afghanistan

High Representative and Foreign Minister had an extensive exchange of views on the situation in Afghanistan. They agreed on the importance of maintaining sustained engagement with Afghanistan to promote stability and countering narcotics as well as the threat of terrorism, said the joint press release.

“The two expressed grave concern at the potential for an economic collapse and significantly worsening humanitarian crisis and a fresh flow of refugees,” it added.

Both sides acknowledged Afghanistan’s serious liquidity challenges which strain the legitimate banking services. They also agreed on the need for continuing urgent and unhindered humanitarian assistance and basic social services support to the Afghan people.

They highlighted the importance of improving the socio-economic situation and preserving human rights, notably those of women and girls, and persons belonging to minorities.

Both sides supported dialogue among the Afghan parties for achieving national reconciliation and underlined the importance of an inclusive and representative government, to enhance the prospects of security and stability.

The High Representative thanked Pakistan for its support in the evacuation of EU nationals and the safe passage of people from Afghanistan. Foreign Minister Qureshi expressed Pakistan’s support for the EU’s inclusion in the regional political consultation mechanism on Afghanistan.

Foreign Minister Qureshi reiterated Pakistan’s deep concerns about human rights violations by India in Jammu and Kashmir, and efforts to change the demography of the disputed territory in violation of UNSC resolutions.

High Representative Borrell underscored that the EU is following the human rights situation in Jammu and Kashmir closely and restated the need for restraint, de-escalation of tensions and resolution of the dispute through dialogue and constructive political and diplomatic engagement.

The HR/VP welcomed as an important step, in the interest of regional peace and stability, the agreement of February 2021 between India and Pakistan for observance of ceasefire understanding at the Line of Control in Jammu and Kashmir and to engage through the established mechanisms.

Foreign Minister Qureshi and High Representative Borrell also expressed views on other regional issues and reaffirmed their endeavour to promote peace and prosperity through concerted efforts.