Stunning apartment on site where Mary once lived

* Shelley moved into a house where the Bloomsbury apartment building now stands in 1815 with her then-lover, the poet Percy Bysshe Shelley 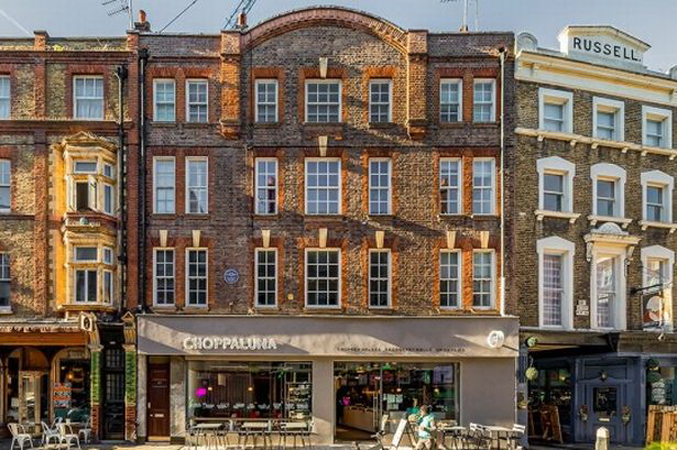 For some house-hunters this will be a monstrously alluring property. A charming two-bedroom apartment at 87 Marchmont Street in London is up for sale for £1,025,000 – and it is on the exact site where Frankenstein author Mary Shelley once lived.

Shelley moved into a house where the Bloomsbury apartment building now stands in 1815 with her then-lover, the poet Percy Bysshe Shelley. A blue plaque outside the property – erected in 2009 – highlights the literary significance of the site.

Mary was just 16 when she fell for the older Percy, then aged 21 and married to his first wife, Harriet Westbrook.

The couple courted in the Gothic graveyard at St Pancras Old Church – which is just a short walk from Marchmont Street. Here, she fell for his ‘wild, intellectual, unearthly looks’ and the pair allegedly consummated their relationship on her mother Mary Wollstonecraft’s tombstone.

Mary’s father, the philosopher and novelist William Godwin, disapproved of their relationship, and so they ran away together to Europe with Mary’s stepsister, Claire Clairmont.

The trio travelled through France and Switzerland until a lack of funds forced them to return to the UK. Back on British soil, Mary and Percy lived in several addresses – one of which was on Marchmont Street.

Claire moved in with the couple. According to Exploring London, their landlady was named Mrs Harbottle, and it was during this period that Mary and Percy welcomed a son, William, who was nicknamed ‘Willmouse’.

They moved out in 1816, leaving England to reside with the Romantic poet Lord Byron at his mansion, Villa Diodati, on Lake Geneva.

It was here, aged just 18, that Mary Shelley began to write what would become ‘Frankenstein, or the Modern Prometheus’ – the book that shaped her legacy.

The legendary horror story tells the tale of scientist Victor Frankenstein, who gives life to a creature as part of an ill-fated experiment.

Mary and Percy lived at number 26 Marchmont Street, but the property was demolished in 1904. The building erected in its wake was renumbered 87 – and the first floor of that very same building is looking for a new owner today.

The property is being sold through estate agency Dexters, and according to its listing, it has ‘original wood flooring throughout, floor-to-ceiling sash windows, a separate kitchen as well as a private terrace’.

As well as two bedrooms, the apartment features ‘a spacious reception room’, which is ‘a comfortable dining and living area’, and one bathroom.

The kitchen leads out onto a decked terrace with ‘high walls for privacy’.

The listing adds: ‘Marchmont Street is set in the heart of Bloomsbury and offers everything from independent cafes to high-street chains within The Brunswick Centre. The nearest tube is Russell Square and King’s Cross is less than half a mile away.’

Michael Keating, Director of Dexters Bloomsbury, says: ‘This bright first-floor flat offers buyers the opportunity to purchase a piece of history in one of London’s most historic neighbourhoods.

‘Marchmont Street has a wide array of pubs, cafes and second-hand bookstores. For the literary inclined, St Pancras Old Church and its graveyard are still just a 15-minute walk down the road.’