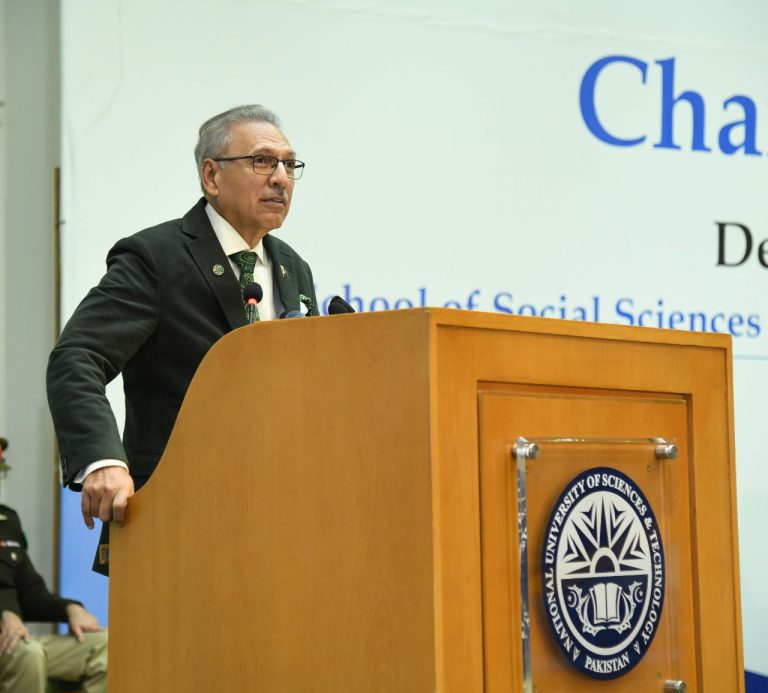 He was speaking at the inaugural session of 22nd Annual Population Research Conference arranged by Population Association of Pakistan and United Nations Population Fund (UNFPA) here. The theme of the conference was Population Challenges in a Changing World.

Dr. Arif Alvi addressing the inaugural session of the 22nd Annual Conference of the Population Association of Pakistan, in Islamabad, on 07-12-2021. He said women had the opportunity to get financial independence by acquiring digital and marketing skills and selling products while staying at home.

The President said rising population was a major challenge for Pakistan which had been tackling the issue for the last many decades. “Message of fewer children, prosperous family should have reached everybody.” He said Ulema had supported efforts of the government for controlling population in the country.

He opined that with better communication skills, people could be influenced and convinced to keep their families small. Media had a significant role to play to disseminate the message regarding population control, he added. The President said in the last two years during the coronavirus pandemic, due to role of media, message about the disease reached everyone.

People of Pakistan cooperated with the government to cope with the coronavirus pandemic, he said adding contrarily there was resistance in the west against mandatory rules to control coronavirus. He said priority should be to deliver a simple message of keeping balance in having a family. Lady health workers and mid wives would be critical in carrying the message to families.

He said hurdles in family planning were malnutrition in women and neonatal deaths. “Stunting has long-term implications and there is no catch-up growth to recover from stunting.” In Pakistani society, family planning was a sensitive issue, he said adding according to an estimate eight million pregnancies occur every year and four million of them were unwanted pregnancies.

The President said the challenge of lack of resources for education and health sectors needed to be addressed. “Investment in education and health makes a nation developed.” Talking about economy, he said Pakistan’s exports were increasing but imports were also surging while one of the reasons for the present economic difficulties was the supply chain issues in the global economy.

He said the government was bearing the burden of mistakes of the past governments, corruption, and mismanagement. The President hoped that in the next 10 years Pakistan would acquire a unique position by utilizing the intellectual abilities of its people especially youth. He said poverty was the reason for more births as people saw security in more children while rich people produced fewer children. The representatives of Population Association of Pakistan and United Nations Population Fund (UNFPA) also spoke on the occasion.