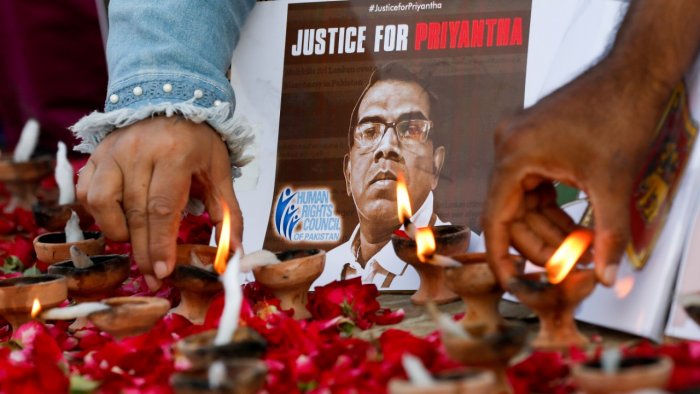 The Prime Minister’s Office is to hold a condolence reference today for Sri Lankan national Priyantha Kumara, who was lynched to death by a mob in Sialkot last week.

A mob comprising hundreds of protestors, including the employees of the factory Kumara was the manager of, had tortured him to death on Friday and later burnt his body over blasphemy allegations.

A first information report was registered against 900 workers of Rajco Industries on the application of Uggoki Station House Officer (SHO) Armaghan Maqt under Sections 302, 297, 201, 427, 431, 157, 149 of the Pakistan Penal Code and 7 and 11WW of the Anti-Terrorism Act.

The incident was followed by national outrage across the country, which led to calls and reassurances for retribution and justice from government officials. Kumara’s remains were repatriated to Sri Lanka on Monday with state honours.

The condolence reference today will be marked by the laying of a wreath at the deceased’s portrait. The event is being held in solidarity with Kumara’s family and the Sri Lankan nation and government.

In addition, a certificate of appreciation will also be awarded to Malik Adnan — Kumara’s colleague who had tried to save his life.

In videos of the incident shared on social media, Adnan was seen trying to calm the mob down and later shielded Kumara when the matter escalated, but in vain. The workers overpowered Adnan and dragged the Sri Lankan national out on the road.

Prime Minister Imran Khan had taken notice of the brave attempt and lauded Adnan’s “moral courage and bravery” on Sunday. He had also announced that Adnan would be honoured with the Tamgha-i-Shujaat.