SAPM announces the dismantling of a 14-storey cruise ship 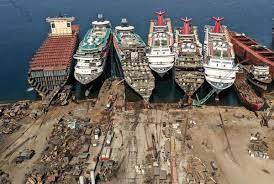 KARACHI: According to Special Assistant to the Prime Minister (SAPM) on Maritime Affairs Mahmood Moulvi, a 14-story cruise ship that entered Pakistani waters last week would be disassembled at the Gadani ship-breaking yard.

He dismissed social media allegations that the Ministry of Maritime Affairs had denied the cruise liner’s owner authorization to use the vessel as a ferry or hotel.

The SAPM clarified in a video statement that the 1200-room Italian-built cruise liner was purchased for Rs2 billion and brought to Pakistan to be destroyed and sold as junk.

According to him, the ship’s purchase contract plainly stipulates that it will be dismantled, ruling out its use as a hotel or cruise ship.

Moulvi maintained that neither the ministry nor the Karachi Port Trust (KPT) had received any request from the shipowner. “Our policy is quite clear. Whoever wants to bring a ferry to Pakistan can bring it, we will give permission,” he said.

“This ship was purchased for scrap,” the SAPM clarified in a video statement, adding that the 1200-room cruise liner of Italian-make was purchased for Rs2 billion and brought to Pakistan to be dismantled and sold as junk.

He said the contract under which the ship was bought clearly states that it would be scrapped, ruling out its use for a hotel or cruise.

The ministry and the Karachi Port Trust (KPT), according to Moulvi, have not received any request from the shipowner. “We have a very clear policy.” We will provide clearance to anyone who wants to bring a ferry to Pakistan,” he stated.