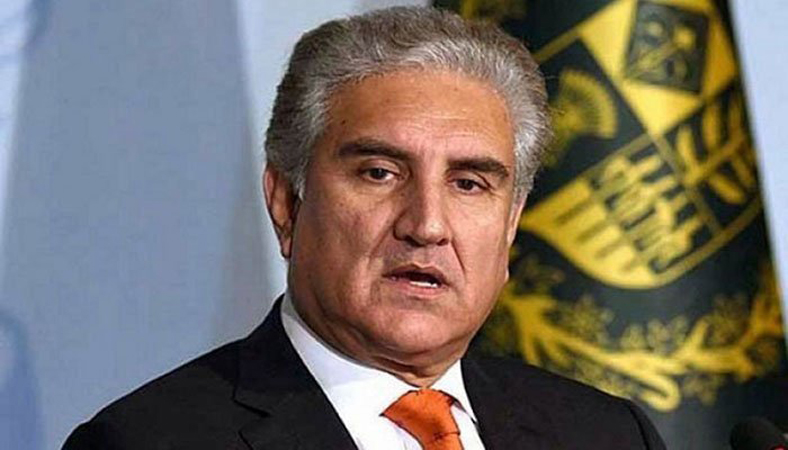 Foreign Minister Makhdoom Shah Mahmood Qureshi on Monday apprised the President of the United Nations Security Council (UNSC) and the UN Secretary-General of the continuing grave situation in Indian Illegally Occupied Jammu and Kashmir (IIOJK). In his letter addressed to the President of the UNSC and the UN Secretary General, the Foreign Minister underscored the deteriorating human rights and humanitarian situation in IIOJK and the persistent threat to international peace and security posed by India’s provocative and irresponsible rhetoric as well as its track record of orchestrating ‘false flag’ operations.He called for the settlement of the Jammu and Kashmir dispute in accordance with the relevant resolutions of the Security Council which guarantee the Kashmiris’ their right to self-determination through the democratic method of a free and impartial plebiscite conducted under the auspices of the United Nations. The Foreign Minister drew attention to the recent spate of extra-judicial killings, arbitrary arrests and illegal detentions in IIOJK, a press release issued here by the Ministry of Foreign Affairs said.The UN human rights machinery, independent NGOs and the international media have regularly reported on and expressed concerns about the increasing intimidation, harassment and reprisal attacks by Indian occupation forces against Kashmiri human rights defenders, journalists and civil society actors.The foreign minister highlighted, in particular, the recent arrest on trumped-up charges of a renowned Kashmiri human rights activist Khurram Parvez, in complete disregard for basic human rights principles, norms and international law.

He reiterated that Pakistan is prepared to engage constructively with a view to halting the oppression in IIOJK, avoiding conflict, and realizing a just and peaceful settlement of the Jammu and Kashmir dispute in accordance with UN Security Council resolutions.

“The onus, however, is on India to create an environment conducive for engagement by: reversing the unilateral and illegal measures instituted in IIOJK since 5 August 2019; stopping its oppression and human rights violations against the people of Jammu and Kashmir; and halting and reversing the illegal demographic changes in the occupied territory,” the Foreign Minister added.

This latest letter from the Foreign Minister was in continuation of Pakistan’s regular communications since August 2019 to keep the United Nations fully informed of the grave situation in IIOJK, and to remind the Security Council of its responsibility to ensure a peaceful and just settlement of the Jammu and Kashmir dispute in accordance with its resolutions and the wishes of the Kashmiri people.