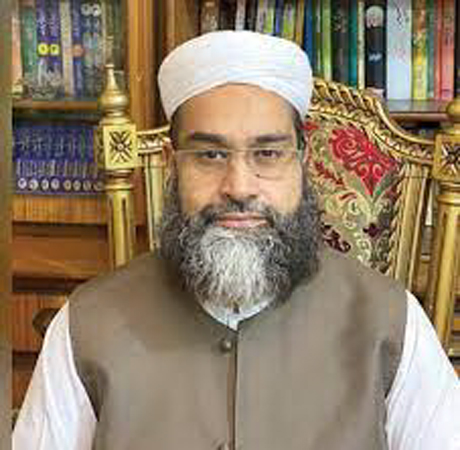 Special Representative to Prime Minister on Religious Affairs Hafiz Tahir Mehmood Ashrafi has said that followers of all religions and religious parties in the country strongly condemn the Sialkot lynching of a Sri Lankan factory manager and want the chief justice of Pakistan (CJP) to treat it as a test case and order a speedy trial for it.

Addressing a press conference at Quran and Seerat Academy, along with the religious leaders from different schools of thought on Sunday, he said that perpetrators of the Sialkot incident should be awarded exemplary punishment to avoid recurrence of such incidents in future.

He said that all leaders of religious organisations expressed grief and concern for linking the sad incident with religion. Those involved in the incident had not only brought bad name to the religion but the country as well, he added.

The special representative said that as per the information, so far 19 key suspects had been arrested. He said the case would be tried in an anti-terrorism court.

Tahir Ashrafi said that law of Tauheen-i-Namoos-e-Risalat and Tauheen-i-Mazhab were there in the country; therefore, no one was allowed to take the law into his hands. The courts and legal procedure were there to decide the complaints in that regard, he added.

He said that a delegation of ulema, headed by Federal Minister for Religious Affairs Pir Noor-ul-Haq Qadri, would visit Sri Lankan embassy to express their grief over the tragic incident.

He said that Muslim, Hindu, Christian and Sikh communities of Pakistan wanted to tell it to the Sri Lankan people “we are ashamed of the incident and we apologise to them on this incident”. He said that all-out efforts would be made to eliminate the culture of extremism from society.

He said the incident was an action of an individual and it did not represent the whole nation.

“Sialkot incident was a source of embarrassment for Pakistan. All political parties, the whole nation and the Overseas Pakistanis have also strongly condemned the tragic and sad incident. I have been getting messages from people who want to support the deceased’s family financially.”

“Islam teaches us a message of peace and we are peaceful people,” she said at a press conference in regard with the Kamyab Jawan Sports Drive here at the Pakistan Sports Complex.

Coming to sports, she said the year 2021-22 has been declared as the sports year. “It is the job of the federal government to promote sports and that is why successful youth sports program was being organized,” she said.

The minister said that players cannot flourish until we give them the sports infrastructure and facilities as per international standards and we would provide them. “No federation can go out and say that we are representing Pakistan without the permission of the government therefore we are bringing in a National Sports Policy,” Dr Fehmida Mirza said and added that the sports facilities here at the Pakistan Sports Complex and in provinces were also being upgraded.

She said we have signed a Memorandum of Understanding (MoU) with the SAPM on Youth Affairs Usman Dar for the uplifting and encouragement of the youth in sports.

“The MoU is aimed for working with coordination (IPC & Youth Affairs) for the promotion and encouragement of youth in sports,” she said and added that through the Kamyab Jawan Sports Drive beginning here on December 6 the youth would come to the grounds and indulge themselves in healthy sports activities.

To a question, athletes Arshad Nadeem and Talha Talib, the minister said ministry and Pakistan Sports Board (PSB) would provide them all out support at all levels and were proud of them for displaying superb performance at the Tokyo Olympics.