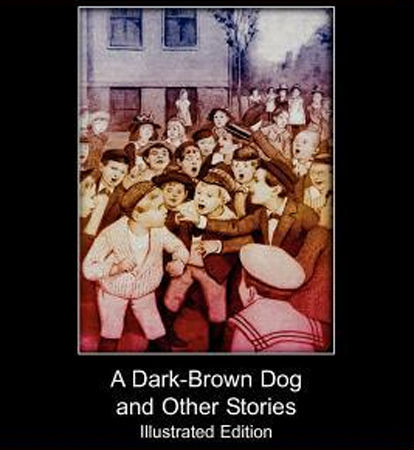 Postcolonial is the name of intervention and resistance which is between the binarily opposing entities like Powerful & powerless, Ruler & ruled, Colonizer & Colonized and Oppressor & Oppressed.

In terms if Ania Loomba, where there is Oppression and the Oppressed, Postcolonial is present. Seen in this context, the short Story A Dark Brown Dog by Stephen Crane, though written in America reverberates, postcolonialism and neocolonialism. It portrays all the above binary categorizations symbolically which apparently, is the story of a young dog, hated, beaten and ultimately killed by the violent and powerful hand only because he was a dark brown dog, even after his best attempts to please his master and his family.

This short story is being taught in universities in Pakistan also as a part of the American literature module. It describes about a young dark brown dog who wins the friendship of a young boy but after a great difficulty. The dog has to work hard to sustain this friendship because he is just a little dog and is not physically that strong as the boy is and so has to make great efforts even while walking and climbing side by side the boy. Besides he receives occasional beatings from the boy who is his friend. But the dog persists and wins the love of the boy but not that of his family because of his dark brown colour. He is hated, ridiculed, and punched and kicked whenever, he is unable to avoid them. The boy, however, shares his grief by weeping and protesting for him. The persistent nature of dog and love of the boy for the dog, however, fails to keep the angry father at bay because one day the father comes home in a mood of recreation and not only plays at the pots but also begins throwing pots at the dog who could not hide timely. When the ridiculingfather does not get satisfied, he first kicks the dog and then throws him out of the window of a three-storey building. The dog falls on the pavement and is killed while three or four neighboring eyes were looking at his fall and landing which lead him to death. The boy went down and saw the dog was killed.

The short story punch line is on the death of the dog because of the vagary and whim if a powerful person. So, the story becomes an echo of postcolonial on number of arguments. First that the dog is still having a broken cord in his neck and that makes him tumble again and again. The broken cord shows that although the dog had found his freedom but the symbol of his slavery of captivity is still in his neck. This echoes the symbolic chains of slavery of African people in the past. Though they are given freedom but the history, thought and fear of the time past is still there in the minds.

Second, when the dog asserts for friendship with the young boy, he has an equal amount of sense of guilt in his mind because he knew that he is dark brown ugly dog who wishes to have friendship with the boy. This is the symbolic feeling of any postcolonial subject while he or she befriends with the powerful, he has this sense of guilt in him. The dog prays and requests the child for friendship even after having all this in his mind. Third, the colour of the dog becomes a restriction on him because with this colour no one would own him and so the family of the child ridicules the dog and beats and kicks him but he somehow survives all this.

Fourth, the whimsical attitude of the master of the home is reflective of the attitude which the people had to face during their days under oppression. It reminds us the physical and psychological burdens the slave had to carry with them. Fifth, then of course, the freedom has been guaranteed to them but this is only a physical freedom, mentally they carry the same burden all the time. The threat of being thrashed, beaten and ridiculed is all the time prevailing in their minds. They are living in a free world but their history keeps on visiting them and the sense of guilt keeps refreshing itself each time any incident of violence, beating and oppression occur. The way the dog is thrown and is killed in the street is again reminder of the vagaries of the powerful that during slavery era, the people could be killed while they faced the ridicule and fun by the powerful.

Stephen Crane by writing such a beautiful symbolic story has become an exponent and representative of the voices of the voiceless people in the past of America and colonizing world at large. He has beautifully depicted the plight of the oppressed people by using the symbolic characters of the child and the dog, especially because of its postcolonial reverberations.