* These were the kind of thoughts with which I entertained myself as I sat alone in a graveyard, waiting for the nearby Italian-inspired Celentano's to open for lunch 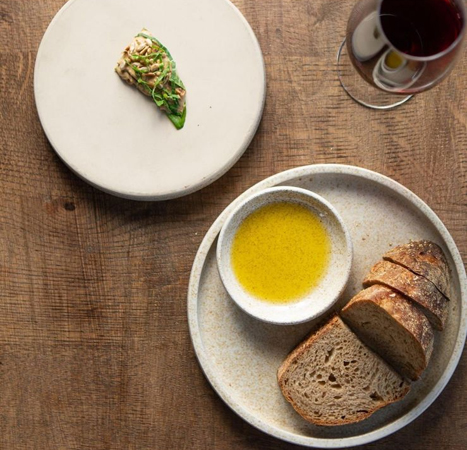 There are few things nicer than a clomp around Glasgow’s cathedral grounds on one of the year’s first crisp, bright autumnal mornings.

On my way to eat at Celentano’s, the air was cold enough to flush the cheeks, while the skyline over the Necropolis, the nearby Victorian burial ground, was dreamily blue. The Necropolis, perched on a low hill, is the archly gothic backdrop that Whitby wishes it had. Yes, goths love Whitby, but let’s face it, it’s a seaside town and, just like daleks and triffids, goths fare badly on sand.

These were the kind of thoughts with which I entertained myself as I sat alone in a graveyard, waiting for the nearby Italian-inspired Celentano’s to open for lunch. Chef Dean Parker and his wife Anna have recently pitched up in Glasgow, from London, where their names were linked with several spots I’ve loved and often returned. Parker was head chef at Darby’s, an NYC-style, Irish-influenced oyster bar and restaurant in the vicinity of the new American embassy in Vauxhall. It’s a spot to which I have pointed many people and their parents, for the fun as much as the pie and crisp beef fat potatoes; it’s a reliably good-quality establishment with astute cooking. Before that, Parker cooked at Sorella in Clapham, where I once stayed so long over lunch, drinking the house vermouth and eating gnocchi, that they closed and opened again for dinner.

In fact, I hold Parker responsible for beginning my midlife addiction to affogato, or vanilla gelato drowned in hot espresso with a large shot of something boozy such as Frangelico. An affogato isn’t big enough to be a proper course, I argue, so doesn’t strictly count as pudding, which means you can order a tiramisu, too.

And now the Parkers have headed north, opening Celentano’s within Glasgow’s Cathedral House hotel, a rather sumptuous boutique residence built in old baronial style in 1896 and now rather tastefully restored, with eight rooms overlooking the cathedral and the Necropolis. Celentano’s is a split-level dining room with sage-green wooden panelling, original wooden floors and pretty black-and-white tiling around a sit-up bar area. It is serene, ever-so-slightly olde worldy and instantly likable.

The menu is Italianish, in so much as it features pastas, cheeses, salumi and so on divided into antipasti, primi and secondi, but this is no red table-clothed, garlic-bread sort of establishment, and more a delightful hodge-podge of all of Dean Parker’s talents and eccentricities. On the “snacks” section of the menu, for example, there are slices of his gloriously pungent homemade pork and fennel salami, alongside chunks of lasagne fritti made with porcini and Cora Linn sheep’s cheese. Yes, fried lasagne. I am a convert. See also tiny doughnuts filled with a truly curious “jam” of salt cod and kimchi.

In fact, it would be easy to stay in the snacks section alone, smearing Parker’s homemade chicken liver parfait on to fresh sourdough, or dipping it in the fine-quality Le Ferre olive oil, but I was dining alone, so needed to be judicious in my menu choices. If I went for a large bowl of charmingly slithery fresh pappardelle in a rich, cream-abundant Dexter beef sauce, would I possibly have room left for the hefty chunk of toasted honey cake with miso, pear and tonka bean gelato? And, if so, dare I fit in an antipasto of jerusalem artichokes with stracciatella and chanterelles? It was a risk, but she who dares wins.

The pasta here is exquisite, as you might have guessed. There was a Mossgiel ricotta agnolotti with cavolo nero and squash that I’ll certainly return to try. The jerusalem artichokes were a little soggy and plated on a thick and almost-set earthy, taupe-coloured mushroom sauce that was titivated with the occasional green leaf. This was experimental, rather than safe, sating cooking, but it was very edible nevertheless. That toasted honey cake, by the way, was gorgeously chewy – think of a pleasing wodge of souped-up Soreen malt loaf with an oozing cream centre sat on a plinth of sweet pear and ice-cream, with a flickering note of umami from the miso. It is a great dessert.

It’s very early days for Celentano’s, meaning now is a great time to book a table. In fact, it might be the perfect Saturday outing: there are 3,500 monuments to the deceased in the nearby Necropolis that you can spend an entire morning perusing, before wandering over to Celentano’s for lunch to honour the living.

Life is short, cruel and bumpy, so make time for long lunches with friends that slide on into dinner time featuring honey cake, laughter and bowls of fresh, slippery pappardelle. You might as well. I’m not sure where we go after this life and I know even less about the catering there.