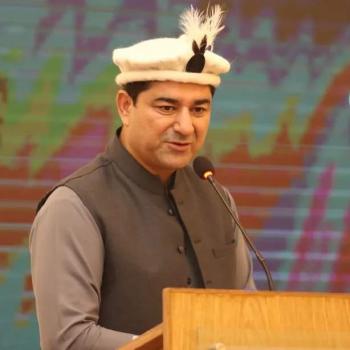 ISLAMABAD: Gilgit Baltistan Minister for Tourism Raja Nasir Ali Khan on Saturday said that there is no lack of talent in Gilgit-Baltistan and the government was taking various steps to promote local sports of this area across the country including polo game and other cultural festivals.

He said, “We want to promote ice-hockey at international level to participate in Olympic games”. Raja Nasir said huge revenue could be gained through sports tourism sector of GB as maximum facilities were being provided to tourists. Talking to PTV news, he said at the first step, we have revised our tourism policy and issue of granting ‘trekking permits’ has been brought under the tourism ministry adding this step helped us accumulating wealth that could be utilized for the betterment of locals.

To a question, the minister said that GB is very attractive place for foreign and local tourists to observe a unique culture and civilization of the area. Minister said the government is working to establish tourism authority in Gilgit Baltistan and for this purpose legislation is under process in coordination with all stakeholders. He said that a task force is also formed for strict monitoring and sustainability of tourists places. Raja Nasir Ali Khan said the government is also working to promoting winter tourism in the province.

He said the tourism industry has huge potential to contribute to the economy of the country, therefore, more focused approach is need of the hour. He said GB is declared a plastic free zone and it has been requested to the tourist to follow the parameters and other laws for the neat and clean environment of GB. The Minister expressed that GB has huge potential in the sector of tourism.

He said there is different types of land in the GB that includes hilly areas, mountains, valleys, lakes, forests, natural fountains, desert area and cultivated lands, etc. He said now due to the road networks the traveling time to GB has reduced from 6 to 3 hours adding that Sakardu Airport is fully functional and producing handsome contribution in the promotion of tourism sector.

Minister said that from the next season the international flight operation would be started to facilitate foreign tourists. He said GB government was taking practical steps to fulfill the vision of Prime Minister Imran Khan for the promotion of tourism sector. He said the government is also using social media platform for conveying messages to foreign tourists that around 2000 rooms were available for the tourists.

He said most of the tourist wanted to keenly observe Pakistani culture and traditions of GB. Replying to a question, he said 55 percent area of GB had not been explored so far and now the government is taking various steps to ensure that the tourists should get access to the remaining areas of GB with new ways.

He said that electricity, roads, internet networking, communication had been improved for the tourists and new job opportunities would be created for the local youths to mitigate the pressure of unemployment. He said that now well-trained staff would provide their services in the hotels.