* 'When I was a kid and I was looking at auctions and catalogues, I always felt it was impossible to participate financially and that I was by definition excluded,' Gouzer said 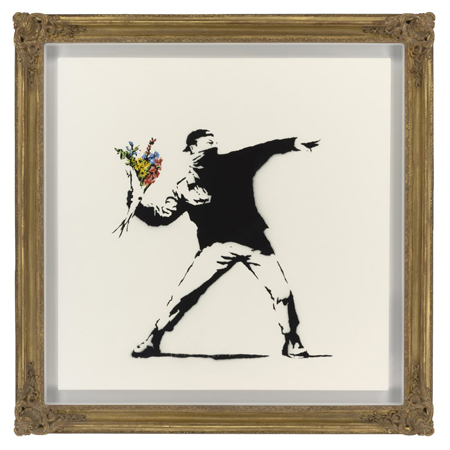 In the latest example of art market disruption, a prominent former auction executive teamed up with cryptocurrency experts in May to purchase the 2005 Banksy painting “Love Is in the Air” for $12.9 million and now plans to sell off 10,000 pieces of it as NFTs, or nonfungible tokens.

The executive, Loic Gouzer, who upended the traditional auction format while he was at Christie’s – most notably orchestrating the sale of a $450.3 million Leonardo da Vinci painting in a contemporary art auction in 2017 – has helped found the company Particle, a platform that merges art and technology with a goal of reaching a broader pool of potential buyers.

“When I was a kid and I was looking at auctions and catalogues, I always felt it was impossible to participate financially and that I was by definition excluded,” Gouzer said in a telephone interview. “Fractionalizing the work in 10,000 NFTs allows a much wider audience to be part of a collecting experience.

“Of course you can enjoy art when you go to a museum, but the enjoyment from art comes also with owning it,” he said. “That’s why people collect.” If successful, the venture could help fuel a burgeoning category of competition in the art market, with consortia of multiple buyers challenging the preeminence of billionaire collectors at a time when the pandemic has accelerated online commerce. NFTs have become increasingly popular, accounting for one-third of online sales, or 2% of the overall art market, according to the database Artprice.

Last month, thousands of cryptocurrency fans – calling themselves ConstitutionDAO – pooled their money to bid on an original printing of the Constitution at Sotheby’s. Last March, digital artist Beeple sold his NFT “Everydays: The First 5,000 Days” for $69 million at a Christie’s online auction.

Longtime collectors remain skeptical of NFTs, and art experts say the Particle enterprise is just the latest iteration of a virtual art world that has yet to be proven. “A work of art is a unique object, and collectors who love art want to own the object itself,” said Megan Fox Kelly, president of the Association of Professional Art Advisors. “The NFT is a separate entity from the object. I think we’re still in very early days of understanding how these NFTs exist as works of art,” Kelly said. “Right now they appear to be investment vehicles, with potentially very significant returns, and the conversations around them are focused on that.”

The physical Banksy painting “Love Is in the Air,” which features the image of a bomb-thrower hurling a bouquet of flowers, is to be exhibited starting Friday at the Institute of Contemporary Art, Miami, during Art Basel week.

The Banksy was divided into a 100-by-100 grid, resulting in 10,000 unique squares, or Particles, which will be sold as NFTs for about $1,500 each. Every particle represents a minority ownership in the painting and will come with a collector’s card that shows the whole artwork as well as the particle’s location on the painting.

Gouzer said that his experience last April selling artist Urs Fischer’s first NFT – a unique digital token encrypted with the artist’s signature and individually identified on a blockchain – for about $98,000 on his auction app Fair Warning prompted him to explore similar sales. “I noticed that so many people were interested in art but had no way to be part of it,” Gouzer said.

A former chair of postwar and contemporary art at Christie’s, Gouzer started the new venture with Shingo Lavine and Adam Lavine, co-founders of ethos.io, recently rebranded Voyager, which connects financial institutions with the blockchain. The other founders are Philip Eytan, co-founder and chair of Voyager, and Oscar Salazar, founding chief technology officer and chief architect of Uber.

Particle has raised $15 million in seed funding, and Gouzer said it would be raising more to expand its inventory. The group was encouraged by the recent example of ConstitutionDAO, which raised the cryptocurrency Ether for its losing bid.

“That showed people want to be part of something greater,” Shingo Lavine said. “There is a tremendous appetite for being able to tap into fine art masterpieces and expensive relics.”

The founders said they are also responding to the widespread desire for ownership. “There is a difference between the person who has that image and has downloaded it and the person who owns it and says ‘It’s mine,'” Shingo Lavine said, adding of NFT buyers, “People are accepting this new narrative of owning things.”

But legal questions of piracy and fraud in the NFT market have not been tested in the courts, creating an element of risk. Also unclear is whether other countries will recognize the validity of an NFT sale. “Because you have these marketplaces, third parties with their own contracts and currency issues, it’s much more complicated from a legal perspective,” said Diana Wierbicki, a partner and the global head of art law at Withersworldwide.

The company has established the Particle Foundation, a nonprofit that will maintain its purchased artwork and tour it for exhibitions. One percent of its purchases will be donated to the foundation, which will act as a so-called protective shard, ensuring that no single person can claim possession of the physical painting. “The work can never be resold,” Gouzer said.

Interested buyers may apply starting Dec. 13 and in the meantime can sign up for the waitlist on particlecollection.com. The sale of Banksy units begins the week of Jan. 10 and will be held on the Avalanche blockchain platform. The Particle company says it will try to ensure the units are distributed among different buyers rather than have an individual buyer acquire more than one.

This is a different experience, one focused around collecting and not investing.” As for starting with the Banksy work, Gouzer said the painting’s rebellious spirit was an apt metaphor for what Particle is trying to do – challenge the status quo. “It’s a piece for revolution,” Gouzer said. “We’re not trying to change the world here, but we are trying to reach a new community and to compete with some of the biggest collectors in the world.”