* We like our karrahi well done, lots of gravy, spicier as it can get, with the meat cooked so well that it melts in your mouth 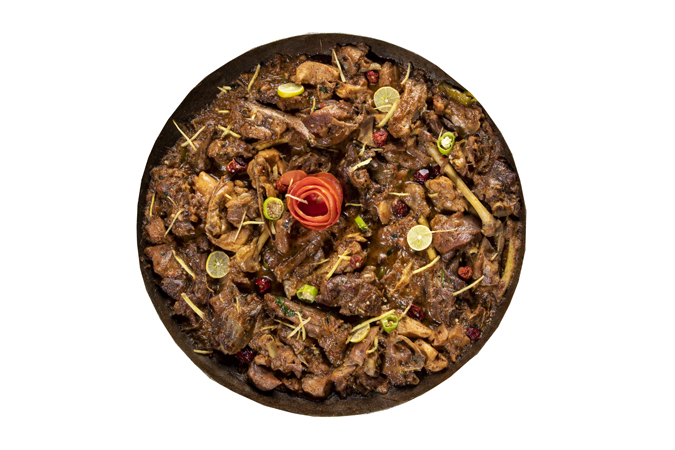 You are not a true Lahori if karrahi is not your comfort food. Regardless of which meat it’s prepared in, karrahi with naan is the staple food of the city. For some, the spicier the better, for others, buttery and salty (namkeen) is the way to go. Being a foodie myself and having tried karrahi from all over the city, including homemade ones, there is tough competition over who makes the best karrahi in Lahore.

We like our karrahi well done, lots of gravy, spicier as it can get, with the meat cooked so well that it’s soft and tender. We want to take a bite of it and feel all the flavours exploding into our mouths. Not many vendors and chefs can prepare it exactly like that.

Standing proud and tall, rubbing shoulders with karrahi stalwarts is the famous and esteemed Butt Karahi of Lahore. With branches all over the city, we visited the grand and opulent DHA, Phase IV branch a few days ago.

We tried a number of items that included Cheese Naan, Chicken Karahi, Mutton Karahi, Butt Special Mix Platter and Mutton Brain Masala. Lahoris eat with their eyes and the more there’s on the table, the more savoured they feel. For dessert, we ordered gajar ka halwa.

STRENGTHS — owned by Faisal Butt, who has the Lakshmi Chowk branch, Bahria Town branch and now this under his, it’s the grandeur of the premises that take you in. A lot of vision and hard work has been put in to make the interior, the décor and the ambience warm and welcoming. Having been to many other branches of the chain, this one in particular impresses us because of the distinct fine-dining appeal to it, something which the other branches lack.

For four items only listed on the menu, you will find us going back there over and over again. First and foremost, it’s the Chicken Karahi, half of which is priced at Rs 1,300. It checks all the aforementioned boxes I mentioned; soft and tender chicken, spicy and flavourful. Lahoris don’t like their food bland. The second item is the Mutton Brain Masala. Just mentioning it right now is transporting me back to the time I had it and realised how long it had been since I had something desi so delicious. It’s priced at Rs 1,000. One number three would be the Butt Special Mix Platter priced at Rs 3,000. Before you raise eyebrows on the expensiveness of it, let me tell you that it serves two-three people, contains tikkas and kebabs and is prepared by the most reaped of staff. Full marks for this one. Lastly, I would mention the delicious gajar ka halwa – moist and sweet.

Standing proud and tall, rubbing shoulders with karrahi stalwarts is the famous and esteemed Butt Karahi of Lahore. With branches all over the city, we visited the grand and opulent DHA, Phase IV branch a few days ago

The service is swift and accommodating, and before you know it, you are seated and served with the attendants within an earshot for you to place an added order.

WEAKNESSES — I always believe if there’s something not available at your restaurant, it shouldn’t even be there on the menu. As for Butt Karahi, we placed an order for Mutton Yakhni, which was not available.

I found it alarming that no one checked if the people coming in were vaccinated or not.

The Cheese Naan I ordered was bland! Cheese naans everywhere are supposed to be a poor man’s pizza bread, with a little something more than cheese in/on it.

Again, I would target the naans. The rotis and naans were dry and overbaked, whereas we wanted them crispy and a little moist.