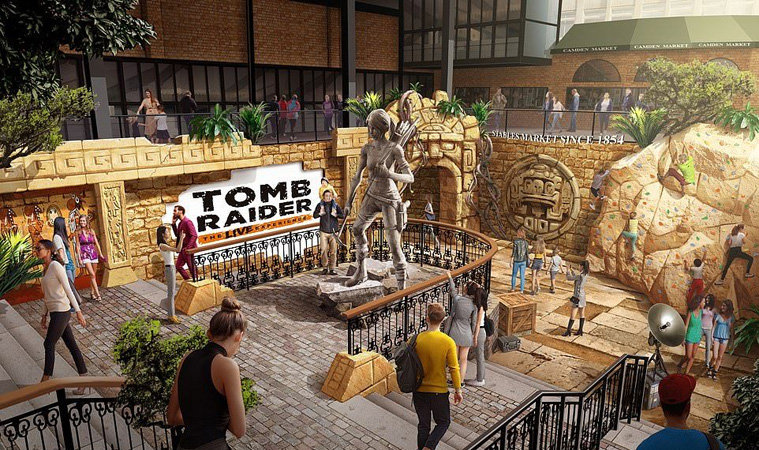 Prepare to release your inner Lara Croft. Plans have been unveiled for a new ‘thrill-seeking’ experience in London – Tomb Raider: The Live Experience, which will open on April 1, 2022.

It’s no joke. The multi-million-pound attraction, which is set within Camden’s Stable Market, will invite ‘adventure-seekers’ to accompany Lara Croft ‘on her pursuit to recover a powerful artefact that has fallen into the hands of a dangerous enemy’.

One rendering depicts a giant statue of Lara Croft towering over visitors at the attraction’s entrance. Another drawing shows a bird’s-eye view of each of the rooms in the interactive attraction, with what looks like a tropical jungle, a lava pit, and a snowy Alpine scene featuring in the new experience.

A third, meanwhile, shows a woman ziplining through a forest scene, with a recreation of an ancient tomb in the background.

In teams of eight, visitors will be given missions to ‘escape a sinking ship, explore the jungles of Costa Rica, discover an ancient tomb, work through environmental puzzles and battle a secret order’.

Live actors and characters from the Tomb Raider film and game franchise will ‘come to life’ in the attraction, which promises to be ‘complete with beautiful scenic worlds’.

A statement reads: ‘Your mission? To save the world.

‘Based on the ever-popular games and movies, Tomb Raider: The Live Experience allows for groups of families and friends to become part of the action and be immersed in the world of Tomb Raider.

A third, meanwhile, shows a woman ziplining through a forest scene, with a recreation of an ancient tomb in the background

‘It’s perfect for those who are looking for action and excitement and will launch visitors on the ride of their lives, joining Lara Croft in a real-life adventure.’

Tom Lionetti-Maguire, the CEO and founder of Little Lion Entertainment Limited, says: ‘Not only will people be whisked into a fantasy narrative on this journey, but they will find surprises, adventure and wonderment around every trap-laden corner. “Unique” doesn’t even begin to describe how much this legendary explorer’s experience is going to take people’s breath away.

‘We make our guests the stars of the action, and what a wild time they are in for here.’

The world first met Lara Croft in 1996, when video game Tomb Raider was released. After than, 11 more games followed, as well as several spinoffs and expansions. As of this year, over 85million Tomb Raider games have been sold worldwide.

The franchise hit the silver screen in 2001, with Angelina Jolie taking the lead role in Lara Croft: Tomb Raider. She reprised the role two years later in Lara Croft Tomb Raider: The Cradle of Life. Alicia Vikander starred in a 2018 remake – Tomb Raider. A sequel, Tomb Raider 2, is currently in the works.

A Tomb Raider comic book series has been in distribution since 1997.