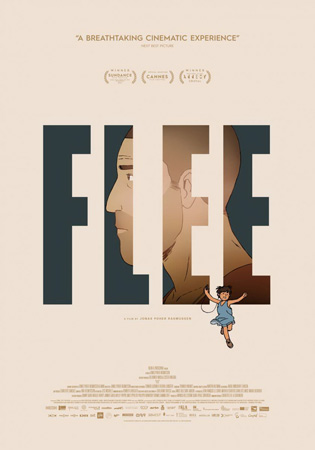 “Flee,” an award-winning film about a gay Afghan refugee undertaking the perilous journey to Europe, puts a real-life human face on the country’s decades-long crisis while simultaneously keeping its subject anonymous – through animation.

Jonas Poher Rasmussen’s hybrid documentary, which won the Sundance festival’s jury prize and is Denmark’s official candidate for next year’s Oscars, stems from his teenage friendship with “Amin.”

“I had the curiosity about his past ever since I met him when we were 15 years old and he arrived to my Danish hometown,” said Rasmussen, now 40.

While Amin was initially not interested in telling his story for film – fearing risking his asylum status and being seen as a victim – the idea to animate their interviews came to Rasmussen, a radio documentary-maker, in 2013.

“This way he can share his story, and still meet people on a clean slate – people wouldn’t know his innermost secrets, know his traumas.”

The telling of those traumas are abundant in “Flee,” from the disappearance of Amin’s father in a 1980s Kabul under communism, to his family’s desperate decision to abandon the Afghan capital as the Taliban encircled the city in 1996.

Archive newsreel footage used within the film evokes obvious parallels with the Taliban’s seizure of power again in Afghanistan this summer.

“It became sadly relevant all of a sudden,” said Rasmussen, who said Amin has watched in despair as “a new generation Afghans pushed out country and they’re gonna be in the same limbo he was – probably even worse.”

But the film focuses more on another familiar news story – the thousands of refugees risking their lives to reach Europe from conflict zones.

In one harrowing sequence depicted in eerie, minimalist sketches, Amin’s sisters are trapped in an airtight shipping container, trying to reach Scandinavia aboard a Baltic Sea cargo ship.

Later, Amin attempts the same crossing on a crowded, leaking vessel, but is intercepted by the Estonian coastguard.

“In a more surreal way, it’s good to dive into his emotion… more show his fear, because that is really what took over there.”

‘A HUMAN BEING’ — Rasmussen was also inspired by “Waltz with Bashir,” the Israeli Oscar-nominated film which animates interviews with veterans of the 1982 invasion of Lebanon.

Watching that earlier film, Rasmussen found it was easier to “take in the stories” without seeing real “human faces suffering” – a sight that audiences are sadly too exposed to by constant news footage.

“The fact that you have this animation medium in between made me not block it out as I would probably normally do,” he said.

Animation also lends itself to another, unexpected aspect of the film – humour.

Amin’s recollection of listening to 1980s pop music on his pink Walkman as a young boy in Kabul prompts a joyful childhood sequence styled on the famous pencil-sketch animation sequence of A-ha’s “Take on Me” music video.

“I’m really hoping that this will crack open the experience of the refugee story.

“That it’s not just about someone who needs something, but it’s about a human being who was in a position in life at some point where he couldn’t control what happened.”

“Flee” is released in US theatres Friday.