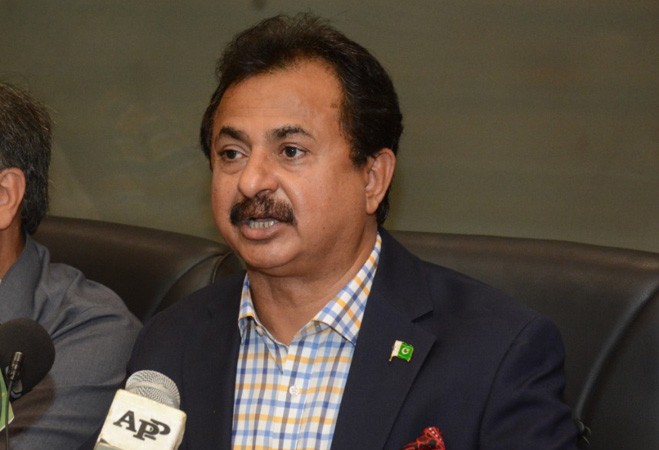 Leader of the opposition in Sindh Assembly, Haleem Adil Sheikh on Thursday rejected Sindh Commission for Regularization of Construction Ordinance and termed it an attempt to legalize land grabbing, forgeries of PPP Sindh government during its 14 year tenure.

Haleem Adil Sheikh addressing a press conference at Sindh Assembly building said that around 3.9 million acres of state land was under illegal occupation throughout the province and PPP government was intending to legalize all the encroachments and counterfeit documentation in the name of Nasla tower and Gujjar Nullah on humanitarian grounds. If ordinance was aimed at compensating affected families of Nasla tower, Gujjar or Orangi Nalla and people living in katchi abadis (irregular settlements) then it must be specified in the draft ordinance, he said adding that ill intentions of Sindh government were apparent from terms of composition of the proposed commission that would be headed by a retired judge and might include Murtaza Wahab and representative of Association of Builders and Developers (ABAD).

Haleem Adil, who is also central vice president of PTI, suggested that all the stakeholders and parliamentary parties be taken into confidence on the legislation according to democratic norms while the proposed commission should be notified by Chief Justice Pakistan after detailed consultation with opposition.

The commission must be chaired by any sitting judge of Supreme Court as case of illegal construction and land grabbing in Sindh was being heard by Supreme Court, he argued. Haleem Adil said that if reservations of opposition were not removed PTI will challenge the ordinance in higher courts as the draft ordinance was manifest to bring Sindh Assembly, political system, executive and governor Sindh in confrontation with judiciary. The leader of the Opposition also took exception to Sindh Local Government amendment Bill 2021, termed it clear violation of constitution of Pakistan and spirit of devolution of powers to grass root level and announced to challenge the bill in higher courts as well. He said that Articles 7, 8, 32 and 140-A called for empowerment of local government institutions and transferring education, health, civic services and other basic functions and responsibilities to third tier of governance. On the contrary, LG bodies were deprived of all their basic functions and responsibilities while constraining them only to management of public toilets, he noted adding that the amendment bill would bring primary health care including Sobhraj and Abbasi Shaheed hospitals, Leprosy Centre, Sarfraz Rafiqui centre, medical and dental college, infectious disease department and many educational institutions under control of provincial government.

Haleem said that situation of provincial government’s health facilities was not hidden from anyone where Sindh government like other sectors had failed completely.

Referring to acts regarding out of turn promotions, posting of non cadre officers and reemployment of retired officer he pointed out that Supreme Court had already nullified three acts approved by Sindh assembly while terming them contravening to constitution. “Both the commission and LG bill were in contravention to constitution of Pakistan and we are hopeful that those will be declared null and vide by the apex courts,” Haleem Adil said adding that PTI would start a province wide campaign and hold protest demonstrations in front of press clubs in nook and corner of Sindh to mobilize people and imparting awareness to masses about controversial legislation aimed at enforcement of ‘Waderana, Sardarana and Zardarana’ system.