Woman speaks about living in ‘the world’s coldest town’ 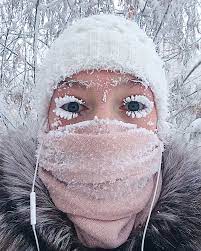 A video of a woman discussing her upbringing in “the world’s coldest village,” Yakutia, Russia.

Kun B, in a five-minute YouTube video, claimed that Yakutia is ‘the coldest town’ on the earth. The video got more than 7.9 million views and hundreds of comments.

Yakutia, often known as Sakha, is a Russian Far East region located along the Arctic Ocean. It has a population of about one million people.

“Have you ever fantasised about living in a world where you can only go outside for a few minutes at a time to avoid frostbite?”

“The bitterly frigid temperatures are enough to kill car batteries and people,” the woman stated.

“However, Yakutians are experts at surviving hard winters, with temperatures as low as -70 degrees Celsius,” she explained.

Kun B mentioned that people wear thick furs and build houses in a way to endure icy environments. She said that the shoes are made of reindeer skin.

The netizens were taken aback by the lifestyle of the inhabitants living in the “coldest town” of the earth.

“It’s astonishing how individuals manage to go on with their lives and survive even in the most hostile conditions.”

“Life always manages to find a way,” one person said. Another netizen found this an interesting way of life, despite the fact that he can’t stand temps below 15.5° C.

When the temperature dips to -30° C, a Canadian social media user says he routinely makes claims about winter.