All About Me! by Mel Brooks — constant corpsing

* Born Melvin Kaminsky, Brooks grew up in working-class Brooklyn, the youngest of four brothers, whose father died when he was two 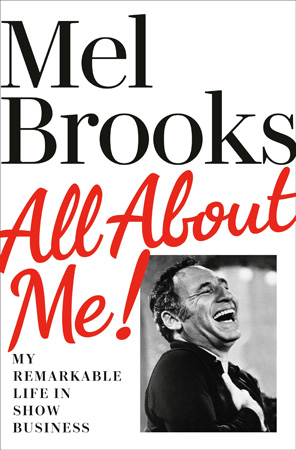 Mel Brooks is the last comic in the world you can imagine wanting to be Hamlet – although, of course, that role is just another way of getting all the attention.

He did play a Shakespearean actor in a 1983 remake of Ernst Lubitsch’s comedy to Be or Not to Be, but otherwise the Danish you’re most likely to associate with Brooks is the kind you buy in a deli.

Now 95, the comedian, screenwriter and director of such beloved spoofs as Blazing Saddles, Young Frankenstein and Silent Movie has written his autobiography. As the title might suggest, All About Me! is very much the work of the man who, as a young Jewish comic in the Borscht Belt resorts, got his break as a “pool tummler”, his job to keep the guests happy and alert, and stop them falling asleep round the swimming pool.

Born Melvin Kaminsky, Brooks grew up in working-class Brooklyn, the youngest of four brothers, whose father died when he was two. There’s a priceless opening shtick about seeing Frankenstein as a boy and worrying that the monster would get him; his mother reassured him that it would have to shlep all the way from Transylvania, find its way to get to South Third Street, then probably eat the Rothsteins downstairs first. The other childhood stuff is fairly mundane: memories of uncle Lee and religious fanatic Louie from Minsk, “clotheslines full of wet wash” and tributes to his mother, “a true heroine”.

Once Brooks enters showbiz, the period he devotes most attention to is his long spell writing for TV comic Sid Caesar, an experience that comes across as both the dream and the nightmare of his existence, as traumatic as his wartime service clearing landmines. It was a joyful, frenzied, hugely stressful period that brought on anxiety attacks – not surprisingly, given Caesar’s volatility: he once held Brooks out of a window by his belt.

Despite the ensuing therapy, Brooks seems to have little self-awareness when it comes to his own behaviour: like the two occasions when he menaced a colleague into handing over everything in his pockets, the second time making him wade waist-deep in Central Park Lake. Brooks was simply one of life’s “wild beasts”, he says, but doesn’t look further into why certain clowns might have a touch of the sociopath, or just be a pain in the tuchus.

He’s good at remembering where jokes came from – like the 48th St impresario drying his underwear, a model for the flamboyantly squalid Max Bialystock in The Producers – but heavy weather when recalling gags and routines: “Nobody knew what was happening but it was absolutely hilarious”… “I don’t know how I held it together”… This is a book that is constantly corpsing.

He’s not so hot at theorising, either: he became a clown for the time-honoured reason that “you don’t hit the kid that makes you laugh”; New York humour has “a certain intensity and a certain pulse”; and, bottom line, “Inept idiots will always be fun”. If you were Bialystock, you’d say: “OK kid, what else ya got?”

Not enough, alas, to make this an essential read. Among the minute recollections of each of his movies, there’s the odd morsel you may not have known; but strangely, he leaves out the most outlandish story about Blazing Saddles, that screen siren Hedy Lamarr sued over her name being taken in vain, with its villain Hedley Lamarr. Nor is this the most revealing treasury of brushes with greatness: he recalls a joke shared with Bob Hope, advice and compliments from Alfred Hitchcock, walks with Caesar show colleague Woody Allen.

As for personal life, Brooks refers in passing to the end of his first marriage, with no mention of his first wife, Florence Baum. There are tender recollections of his long marriage to actor Anne Bancroft, but also an uncomfortable moment, more telling than intended: when Bancroft was having trouble rehearsing a scene, he told her: “You know what’s even harder? Writing!” When Bancroft died, Brooks says, “For a long time, I was inconsolable”, but then collaborators “pulled me out of my abyss of despair and we went to work on our next musical together” – a bizarre evasion of an emotional landmine, and perhaps the book’s most poignant moment.

Unless you’re a Brooks obsessive, or aching for a couple of transcripts of his very droll The 2000 Year Old Man ad libs with Carl Reiner, this is not the most gratifying read. Go back to his best movies instead: they’re sometimes uncomfortably dated, in places as creaky as Brooks’s knees must be. But you’d have to be Hedy Lamarr not to find them funny.