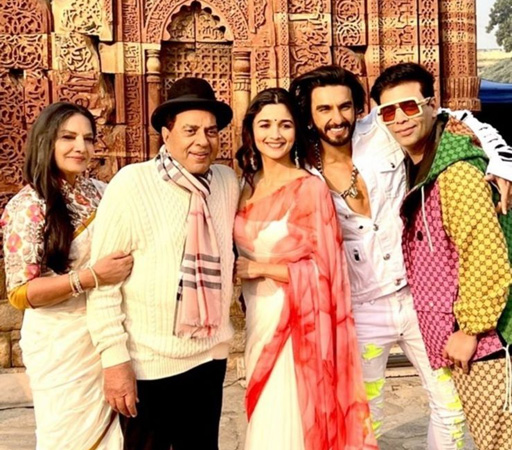 In the photo, the actor is flanked by Shabana Azmi, Alia Bhatt, Ranveer Singh and director Karan Johar, as they posed in front of Qutub Minar.

Wearing a white sweater, black denims, scarf and hat, Dharmendra looked handsome. Shabana in a white saree stood on his right, while Alia held him from the other side, looking pretty in her white-red floral saree. Ranveer in his all-white denim ensemble flashed his brightest smile to the camera, while KJo turned heads with his Gucci look.

Earlier in an interview, Dharmendra had praised young stars Ranveer Singh and Alia Bhatt. He told Times of India, “Ranveer looks so natural in all his films. Bada hi pyaara ladka hai. Whenever we bump into each other at a function, woh aake mere paas baith jaata hai. Likewise, Alia is also brilliant at her work.”

The announcement was accompanied by a video, showcasing a montage of some behind-the-scenes clips. We got a glimpse into Dharmendra, Ranveer Singh, Jaya Bachchan, Shabana Azmi and Alia Bhatt’s characters as Karan Johar directs them.