Commercial use of state land by military unconstitutional: CJP 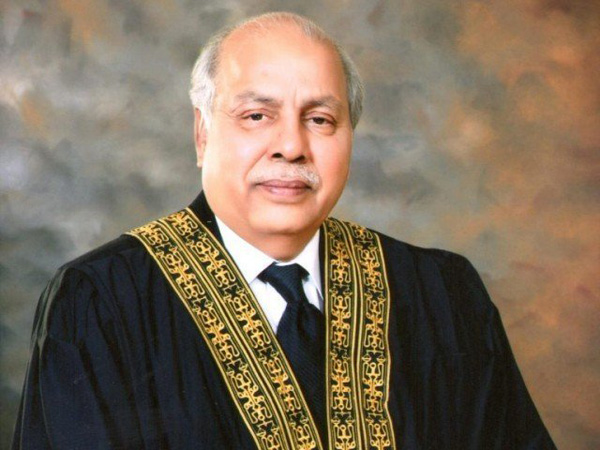 Secretary Defence Lt Gen (R) Mian Hilal presented a report which the court declared “unsatisfactory”. The chief justice asked whether building cinemas, wedding halls, schools and houses fulfilled any defence-related purposes. He noted that all illegal buildings were being demolished in Karachi, while the large walls erected on Karsaz Road and Service Road had been pushed further away from the road.

He said the cantonment land could not be divided into different categories. He remarked that Pearl Marquee and Grand Convention Hall were still standing. “The wall running alongside Kala Pul and the Grand Convention Hall must be knocked down today,” he said. “Large walls have been constructed on Karsaz and Rashid Minhas Road for advertisements. This is the state land,” he added. “Cinemas, petrol pumps, housing societies, shopping malls and marriage halls are not for defence purposes,” the chief justice said and asked the attorney general to inform the court how the Ministry of Defence could restrict their use to defence purposes.

Justice Ahmed said this practice was found on the cantonment board lands all over the country. Referring to the Canteen Stores Department chain of retail stores headquartered in Rawalpindi, he said CSD had also been made an open, commercial departmental store. “A building was erected on Gizri Road overnight. We had barely woken up in the morning and they constructed the building,” he continued. The chief justice said it was not possible to allow the army’s illegal constructions to stand. “If we let these remain, how we will demolish the others?” he remarked.

“Attorney general sahab, who will explain the law to the army? They continue to do what they have to do. The laws on the basis of which they engage in commercial activities are unconstitutional,” Justice Ahmed said. Addressing the defence secretary, he said: “You yourself have served as a general. You must know it is not the law’s intention that land to be used for defence purposes be used for any other purpose. If not used for defence, the land will go back to the government,” he added. “Secretary sahab, if you are saying that commercial use is for defence purposes, then what does the term defence even mean?” the chief justice asked.

The defence secretary said: “Sir, if you allow me, I wish to say something.”

The secretary spoke: “The scope of the term strategic objectives is wide. Commercial activities also fall into the category of ‘strategic defence’. In times of peace, these activities are for welfare purposes and are carried out to keep the morale of the army high.” Justice Qazi Amin said: “We know that it is marketplace laws that operate in cantonments.”

The chief justice added: “Secretary sahab, all that is fine, but where is the cantonment on these lands? There are only houses after houses there.”

The top judge said military officials bought land and then sold it off and left after which the land exchanged several hands. “How will you get it back?” he asked. The chief justice said schools and wedding halls had also been set up at the Faisal Base. “Anyone could be running on the runway as a wedding guest,” he remarked.

Justice Qazi Amin remarked that the army “should not compromise on its big goals for petty business”. The army should take care of the sanctity of its institution, he added. The chief justice remarked that shopping malls had also been developed on the defence land in Quetta and Lahore. “It is not clear how the Ministry of Defence plans on continuing these activities,” he said.

Allotting houses to the military officers has nothing to do with defence, he said.

T he chief justice then asked the defence secretary what his plans ahead were, to which the secretary defence responded by saying that a committee of all the three military services had been formed which will identify illegal constructions.

Justice Ahmed said cantonment land had to be returned to the government when defence objectives were met and that the government, in turn, returns it to the party from which it was acquired. “Giving houses to top military officers does not fall within the ambit of defence purposes,” he said. “How can the army carry out commercial activities on state land? State land cannot be exploited,” he stressed.

Addressing the attorney general, the chief justice said he must inform the defence secretary that the report he had submitted to the court was “incorrect”.

“The report states that the illegally constructed buildings have been demolished, whereas they still stand. This is a matter of shame for both the court and the army,” Justice Ahmed said.

He said a comprehensive report should be submitted as to which cantonment land was designated for what purpose.

“According to the law, strategic land will only be used for defence purposes,” he added. The chief justice gave the defence secretary four weeks to submit a detailed report to the court.