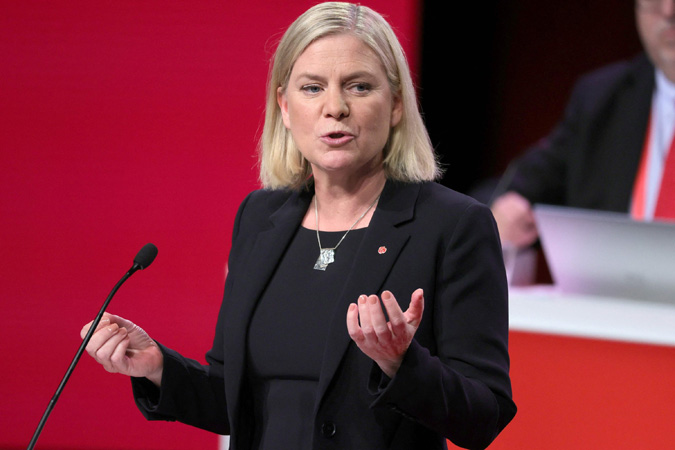 Sweden’s parliament on Monday elected Magdalena Andersson as the country’s prime minister, the first woman to hold the post, five days after her initial bid lasted only hours.

Despite being a nation that has long championed gender equality, Sweden has never before had a woman as prime minister.

Last week Andersson was elected by parliament but she had to resign just hours later — before she even had a chance to formally take office — after the Green Party quit her coalition government.

The parliamentary turbulence was unprecedented in politically stable Sweden, where the Social Democrats have dominated for almost a century.

The 54-year-old, who is the outgoing finance minister, will now head a minority government made up solely of the Social Democrats, with 10 months to go before September general elections.

She is due to formally take over the post on Tuesday, succeeding outgoing Prime Minister Stefan Lofven after his seven years in power.

A total of 101 members of parliament voted for Andersson, while 75 abstained and 173 voted against.

Under Sweden’s system, a prime ministerial candidate does not need the support of a majority in parliament, they just need to avoid a majority voting against them.

Andersson now faces a challenging period in the run-up to the election, which observers predict will be a close race.

While some experts say the Social Democrats will now have an easier time as the sole party in power without having to make concessions to a coalition partner, others predict a bumpy road ahead.

Her weak minority — the Social Democrats hold 100 of 349 seats in parliament — means she will have to seek support for her policies on both the left and the right.

She will also have to govern with a budget presented by the opposition conservative Moderates, Christian Democrats and far-right Sweden Democrats, after her budget failed to pass through parliament last week.

Her most obvious cooperation partners are the Greens, the Centre and Left parties.

But she is also expected to court the right on issues blocked by the Greens during their time in government, including the expansion of Stockholm’s Arlanda airport and a nuclear fuel waste site.

Andersson has also singled out crime and immigration — key voter concerns — among her top priorities, issues where the Social Democrats are closer ideologically to the centre-right.

The opposition has however been quick to point out that the right has the strongest caucus in parliament, and would likely be able to pass many of its policies without the Social Democrats.

The four opposition parties on the centre and right are united on most issues and control 174 seats in parliament, while the four parties on the left and centre, which hold 175 seats, are more splintered.

“The Social Democrats will have to accept that it is parliament that decides and government obeys,” Moderates leader Ulf Kristersson warned before the vote.

An economist who has served as finance minister for the past seven years, Andersson took over as leader of the Social Democrats on November 4 from Stefan Lofven.

He resigned as prime minister a week later in order to give her time to prepare for the September elections.