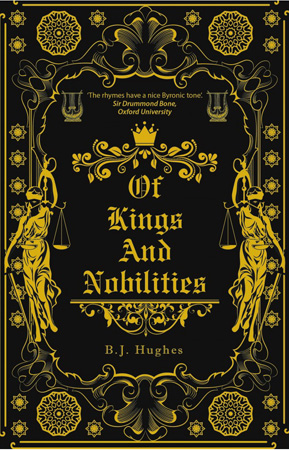 Of Kings And Nobilities by British Pakistani writer, BJ Hughes sends readers’ emotional state into the past or the future – it transcends times. Such poetry – in the form of a satirical verse – comes to center stage after a long time. Pakistani poets including among others Adrian Husain, Fatima Ijaz, Mehvash Amin, Moeen Faruqi, Arfa Ezazi, Harris Khalique, Ilona Yusuf, Peerzada Salman, Salman Tarik Kureshi have been producing works of art indeed and Hughes’ words add an extra mile into the philosophy and creative sense that amalgams to form poetry. The poet’s real name is Sadiq, but he creates a world of his own by embracing himself with his pen name, Hughes – that he borrows from Hughes Hall at Cambridge university – his alma mater.

The book opens with a touch of simplicity as the poems are minimalist yet deeply rooted with the poet’s conscious thought about the world around him and of himself. This sets the tone for a conversation – a dialogue – that continues through the book. Words are exchanged, ideas are dispersed, and with it begins the tête-à-tête between the supreme being and his humble creation. One might find parallels to Iqbal’s Shikwa and Jawab-e-Shikwa. However, Hughes humbly presents himself as a student of poetry, rhyme, and verse. He displays the art of exploring emotions, expressing ideas, and enchanting the readers’ souls with poems that encapsulate history and its tumultuous eras – a courageous act indeed.

The poems gradually augment in character – with each verse adding grandeur to the narrative – as the exchange of thoughts between God and the Bard continues. Hughes is the Bard – a reference to a lyrical poet who recites epics. Hughes has set a tradition by developing the dedication section of his book with a poem – something not seen much often. He writes, Let my readers know I’m no Alexander Pope, / I’m neither Keats nor Alexander Pushkin, / Whose lyrics had such grace and scope, / I’m educated on the contrary, which, is a sort of sin.

What follows is a journey through time as Hughes delves upon – in his conversation between God and the Bard – the eras of our past that defined and redefined history. From the time when Rome burned to the forced suicide poisoning of Socrates – Hughes takes a plunge into the past. He discusses the texts written by Plato and the history of the Ottoman Empire, the era of the Mughals and the conflicts and wars that occurred. The themes are hard to digest for they show man’s fall to disgrace as he annihilated his species and the world he lived in. Hughes takes a moment in the ‘Introduction’ and asks readers to ‘find themselves better indulgences’ if his verse ’cause them any cerebral inconveniences.’

Of Kings And Nobilities has been admired by Sir Professor Drummond Bone (University of Oxford), Charles Moseley (Senior Fellow of Cambridge University and the Royal Society of Arts), Arundhathi Subramaniam (Indian award-winning poet), Laaleen Sukhera among others. Writing prose is different from writing poetry. Hughes would have to absorb so much historical text and references before conjuring an effort to bring out these poems. The emotional and mental labor Hughes would have gone through while recalling the atrocities of the past – the mayhems and carnage that make up our world’s history – is too great as a conscious exertion and an emotional deed.