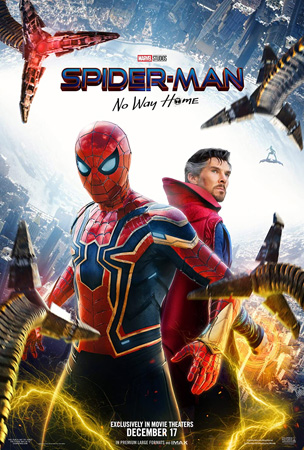 Sony and Marvel are understandably keeping the secrets of Spider-Man: No Way Home close to their chests. But that has not stopped fans from scrutinising every bit of information – leaked screenshots, TV spots, merchandise, and so on – to find out if actors Tobey Maguire and Andrew Garfield are in the movie. The two stars played Spider-Man in earlier film series, and have long been rumoured to be joining Tom Holland in No Way Home.

Now, a piece of merchandise might have confirmed at least Tobey Maguire’s presence in No Way Home. The merch is from BarkBox, which sends people a box full of treats for their canine friends every month. Shared by the Twitter user @Dominic_kravitz, the latest box is a special Spider-Man: No Way Home edition.

On the cover prominently is Tom Holland’s version of Spidey. But in one corner, another wall-crawler’s head can be seen. Judging by the pattern on the suit, this indeed looks like Maguire’s version of Spider-Man.

These rumours began circulating when it was announced that supervillains from earlier Spider-Man movies, like Electro and Doctor Octopus (Alfred Molina), will return in the film. All this is possible because No Way Home deals with the multiverse.

Benedict Cumberbatch reprises the role of Doctor Strange in No Way Home and replaces the now-departed Tony Stark as Peter Parker/Spider-Man’s mentor. It is because of an arcane ritual conducted by him on Peter’s request that the multiverse is ripped open The last film, Spider-Man: Far From Home, ended with the revelation that the whole world is aware of Spidey’s real identity, thanks to Mysterio and J Jonah Jameson. Strange performed the ritual on Peter’s request to undo this. But Peter gets cold feet when he realises that MJ, Ned and Aunt May will forget him too and tries to stop the ritual, and this goes terribly wrong.